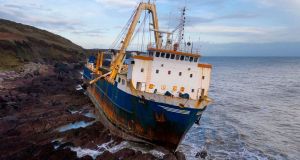 The abandoned cargo ship MV Alta stuck on rocks near the village of Ballycotton south-east of Cork. Photograph: Cathal Noonan/AFP via Getty

Preparations are continuing over the weekend to use a helicopter to airlift off barrels of oil from a ghost ship stranded on rocks near Ballycotton in east Cork, according to Cork County Council.

According to Cork County Council which is co-ordinating efforts to prevent any pollution from the MV Alta, a marine contractor is continuing with preparations to airlift off barrels of machine oil.

The MV Alta was washed on to rocks at Ballyandreen some 4km west of Ballycotton by Storm Dennis which battered the south and west coasts of Ireland with high seas and strong winds.

Cork County Council hired a marine surveyor to examine the vessel and over the past week, the ship has been inspected to see if there was any risk of fuel or bunker oil spilling and polluting the sea.

The marine surveyor found there was very little diesel left in the fuel tanks but they did find barrels of machine oil and diesel stored in various parts of the 77m long cargo freighter.

Over the past few days, the marine contractor has been bringing those barrels on to the deck of the freighter as well as bringing other barrels aboard to safely store other materials for removal.

According to Cork County Council County Engineer, Kevin Morey, it is hoped to airlift all the barrels from the ship starting on Tuesday providing the weather remains favourable.

“Cork County Council’s marine contractor is progressing well with preparations for the removal of the oil and other materials identified which could pose a pollution risk in the event of their spillage.

“This work will continue throughout the weekend in order to ensure all these materials are ready for their safe removal by helicopter on Tuesday, should weather conditions be suitable,” he said.

Mr Morey said the council is again asking members of the public to stay away from the wreck as it is located on a dangerous and inaccessible stretch of coastline and is in an unstable condition.

And he said that as part of the operation, Cork County Council is restricting access to a local cul-de-sac road with access only being permitted for local residents living near Ballyandreen.

“The Council also wishes to advise that the lands along this stretch of shoreline are in private ownership and are not open to the public,” said Cork County Council in a statement.

Meanwhile, the Revenue Commissioners, who are acting as Receiver of Wreck for the MV Alta, are continuing with efforts to try and trace ownership of the 44 year old abandoned freighter.

The freighter was abandoned in October 2018 when it ran into difficulty while sailing from Greece to Haiti after its main engine broke down over 1,600km off Bermuda and the crew asked for help.

According to Insurance Marine News, the US Coast Guard rescued the crew of ten from Panama, Honduras and Greece when the ship was some 2,000km south east of Bermuda.

The MV Alta at that stage was registered in Tanzania and was owned by Alta Shipping of Miami, Florida and salvage attempts by the owners were made, according to Insurance Marine News.

The HMS Protector, which was on its way to the Bahamas to assist with hurricane relief, attempted to make contact with the MV Alta but received no response and it continued drifting eastwards.

It appears that both these most recent registration of ownership took place while the ship was abandoned at sea adding to the mystery surrounding the ownership of the ghost ship.