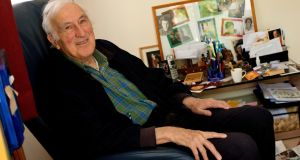 L’Arche International, which assists people with intellectual disabilities and has four centres in Ireland, was founded by Jean Vanier. Photograph: Getty Images.

Catholic Archbishop of Dublin Diarmuid Martin has described as “particularly reprehensible” the actions of the late L’Arche founder Jean Vanier after a report found Vanier had sexually abused six women.

L’Arche International, which assists people with intellectual disabilities and has four centres in Ireland, said on Saturday an inquiry it commissioned last year into allegations of sex abuse carried out by Vanier had “received credible and consistent testimonies from six . . . women without disabilities, covering the period from 1970 to 2005”.

Expressing “great sympathy with those who were inspired to genuine caring in the L’Arche movement”, Archbishop Martin said: “I appreciate their disillusionment and encourage them to keep alive the extraordinary witness they give. We all have an obligation to be at their side at this moment of sadness.”

He continued: “Naturally I think of those who have been exploited and abused sexually. The abuse is particularly reprehensible in that it took place in the context of spiritual guidance and seemingly used false spiritual motivation to justify abuse.

“Those women who came forward showed courage and have rendered a real service to saving the integrity of the L’Arche movement and its care for those with special needs and disabilities.”

Vanier died last May aged 90. L’Arche has more than 10,000 members in 149 communities in 39 countries worldwide. It has four communities in Dublin, Belfast, Cork and Kilkenny, where up to 60 people are cared for. It also provides day services to more than 100 others here.

L’Arche International said “the women each reported that Jean Vanier initiated sexual relations with them, usually in the context of spiritual accompaniment.

“Although they had no prior knowledge of each other’s experiences, these women reported similar facts associated with highly unusual spiritual or mystical explanations used to justify these behaviours.

“The relationships were found to be manipulative and emotionally abusive, and had a significant negative impact on their personal lives and subsequent relationships.

“These actions are indicative of a deep psychological and spiritual hold Jean Vanier had on these women and confirm his own adoption of some of Father Thomas Philippe’s deviant theories and practices.”

Fr Philippe, a Dominican priest who died in 1993, was Vanier’s mentor and spiritual director.

In 2015 Fr Philippe was found by a Catholic Church investigation to have sexually abused 14 women, many of them associated with the L’Arche community, with some incidents back to the 1970s. It is understood that no people with disabilities were abused.

In its statement on Saturday, L’Arche International stressed “the inquiry found no suggestion that Jean Vanier had inappropriate relationships with people with intellectual disabilities”.

The inquiry into L’Arche founder Jean Vanier was undertaken by UK-based GCPS Consulting, which “specialises in helping organisations ensure the safety of children and other vulnerable groups”.

On Saturday, L’Arche International’s leaders Stephan Posner and Stacy Cates Carney said they were “shocked by these discoveries and unreservedly condemn these actions, which are in total contradiction with the values Jean Vanier claimed and are incompatible with the basic rules of respect and integrity of persons, and contrary to the fundamental principles on which L’Arche is based.

“We recognise the courage and suffering of these women, and of those who may remain silent. We also want to express our gratitude to the women who, a few years ago, broke the silence about Father Thomas Philippe and thus helped others to speak out about the undue burden of shame and pain. Because these events took place in the context of L’Arche and some were brought about by our founder; to all of you, we ask forgiveness”.

It was emphasised that L’Arche was “committed to making sure that its...communities across the world are places of safety and growth for all its members, with and without disabilities”.

It has undertaken to conduct “a thorough and independent evaluation of safeguarding [and] wellbeing policies and procedures.

“In addition to the safeguarding and wellbeing regulations, already existing throughout its federation, L’Arche International has created a commission, composed in part of people from outside its organisation, to allow all its members to speak out and to follow-up on any reports in complete confidentiality.”

In a separate statement, L’Arche Ireland and Northern Ireland paid “tribute to the women who gave us their testimony and our thoughts very much remain with them. This inquiry is being taken with the utmost seriousness by our international organisation to better understand its history and improve all safeguarding procedures and policies.

“We will be working with them to implement any recommendations that arise from the process.”

It was emphasised that what had emerged “in no way reflects the ethos or operations, current or historical of L’Arche in Ireland, Northern Ireland or in any part of L’Arche International. Our utmost priority is the safety and welfare of all our community members, and we will support them through this news.

“L’Arche has undertaken a thorough review of well-established and recognised safeguarding policies and procedures across Ireland and Northern Ireland. We remain fully focused on our mission to ensure all community members realise their full potential.”