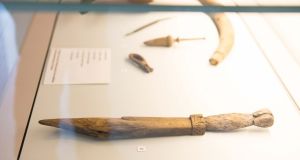 Weaver’s sword on display at the launch of the exhibition at Cork Public Museum. Photograph: Michael O’Sullivan/OSM Photo 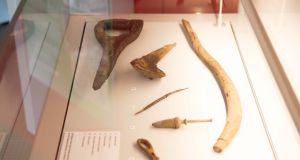 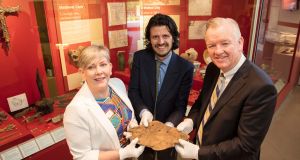 Excavations at a former brewery in Cork have uncovered the foundations of 19 wooden Viking age houses from the 11th and 12th centuries.

Some of the structures date back to 1070, making them 30 years older than any housing previously excavated in the city.

The dig at the former Beamish & Crawford factory also found three stone walls and a doorway from St Laurence’s Church, dating back to the 13th century.

According to Dr Maurice Hurley of University College Cork (UCC), who was involved in archeological digs in Waterford and Cork, both cites appear to have developed as structured Viking urban settlements around the same time in the 11th century.

“All the cities developed around the same time so there isn’t an awful lot of difference between Waterford and Cork in terms of when they were founded in terms of a formal urban layout where you have a public space, a street and an allocation of property,” he said

“But what makes Waterford different is that they have Woodstown – 10km up the Suir – it doesn’t have an urban layout or town structure but there is no comparable Viking site dating from that late ninth/early 10th century period found in Cork – at least not yet,” he added.

Dr Hurley was speaking at the launch of an exhibition of artefacts from the late 11th century Viking period found during the excavation of the Beamish & Crawford site on South Main Street in preparation for the construction of Cork’s long-awaited €75 million event centre.

A team of archaeologists under Dr Hurley excavated the site between November 2016 and March 2018 on behalf of event centre developers, BAM.

The excavation found evidence of the earliest urban layout of Cork city discovered to date, with the first houses built at the Beamish & Crawford site dating from around 1070, which makes them some 30 years older than housing found at the nearby Sir Henry’s site.

Acting curator at Cork Public Museum, Dan Breen, thanked the National Museum of Ireland for lending the newly discovered artefacts to the museum.

“The exhibition shines a light on the Vikings’ housing, clothing, cooking methods and religious practices and among the artefacts on display is a perfectly preserved 1,000-year-old weaver’s sword featuring a carved human face,” said Mr Breen.

Many of the artefacts are wooden, having been preserved in the acidic marshy ground settled by the Vikings and among the other items found were a collection of spoons, ladles and buckets as well as a wooden thread-winder with a carved design of two horses’ heads, he said.