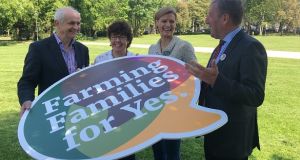 Members of the farming community, including a former president of the Irish Farmers’ Association (IFA), have backed a Yes vote in Friday’s referendum on the Eighth Amendment.

The Amendment, also known as Article 40.3.3, was inserted into the Constitution in a referendum in 1983. It gives an equal right to life to the mother and the unborn, and prohibits abortion.

The electorate will be asked to vote on whether they want to remove it and allow the Oireachtas make provision in law to regulate the termination of pregnancy.

Speaking at a press conference on Wednesday organised by the Together for Yes campaign, Minister for Agriculture Michael Creed said it was “abundantly clear” to him that the Constitution had “no role to play in terms of medical care for women going through pregnancy.

“That is best left to women and their caring physicians, their doctor, their GP, their gynaecologist, their consultant. I think it’s time that we trusted women and trusted their doctors and allow them to proceed with the appropriate care for women during pregnancy and during difficult pregnancies without the Sword of Damocles, in terms of 40.3.3, hanging over them.”

Mr Creed said he believed there was no difference in how people in rural Ireland and in the farming community and people in other parts of the country were impacted by the Eighth Amendment.

“I think that community has engaged, perhaps not as publicly or perhaps not as much under the glare of the media as others have, with this issue. I would say to them – if you want to see change, if you want to have better care in the future for your partners, the women in your life . . . you face a clear choice on Friday next. If you want change, you need to vote Yes.”

In relation to the Government’s proposal to introduce legislation providing for abortion without restriction up to 12 weeks into a pregnancy, something which he previously opposed, Mr Creed said it was a “redundant” plan if the referendum did not pass.

The first hurdle was to remove the Amendment and then the legislation could be discussed in detail, he said.

Eddie Downey, a former IFA president, said this was a “very difficult and emotive issue for the whole country”, but he hoped the State was about to take “a major step forward in caring for our women and dealing with a very difficult situation.

“If we don’t remove Article 40.3.3, we end up with a situation where we remain as we have been for the last 35 years. Really, we can’t continue to treat women in this manner. We can’t continue to export this problem outside of this country. We need to bring it home and deal with it at home.”

Pippa Hackett, the Green Party’s spokeswoman on agriculture, said a Yes vote “will not change anything for the woman who is morally or spiritually attached to continuing with her pregnancy.

“Her healthcare will not change. But it will make all the difference to the woman who is in a dire predicament because of her pregnancy and it will give her comfort and solace that she can go through her pregnancy with all the support that she deserves.”

Lorna Sixsmith, a farmer, said she believed it was not right that her cows could get better healthcare and more compassion from her, her family and her vet than pregnant women who were in crisis could get in Ireland.