Twelve Atlantic islands to vote on Eighth Amendment a day ahead 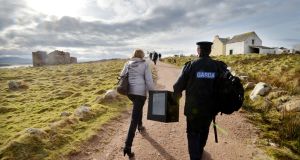 Carrying the ballot box for Gola Island, off the west coast of Donegal, to the polling station on the island to commence the voting on the Islands in the 2016 general election. Photograph: Alan Betson / The Irish Times

Twelve offshore islands on the west and north-west coasts begin voting in the referendum on the Eighth Amendment on Thursday.

Ballot boxes are also being delivered early to the three Aran islands and Inishbofin in Galway West; and to Clare island, Inishbiggle and Inishturk in the Mayo constituency.

The 460 registered voters on islands in the Cork South-West constituency – Bere, Cape Clear, Dursey, Hare and Whiddy islands, along with Long Island and Sherkin – cast their ballots with the rest of the State on Friday.

Former Gaeltacht and islands minister and Fianna Fáíl TD for Galway West Eamon Ó Cuív has initiated legislation to allow all islanders from Donegal to Cork to vote on the same day as the rest of the State.

Weather factors had determined that islanders should vote up to three days in advance in general, local, European elections and referendums. However, Mr Ó Cuív says improved transport and communications mean this is no longer necessary.

Mr Ó Cuív points out that if this referendum had been held in March, during severe weather, parts of the south-east would have been more isolated than offshore communities.

“There is no reason now why islanders have to make their minds up earlier than anywhere else,”Irish Island Federation secretary Rhoda Twombly says.

The island federation supports the Electoral Amendment Bill 2014, which is at committee stage.

Mr Ó Cuív hopes it will be in place by the next general election.