Parents win legal battle to force son (30) to move out 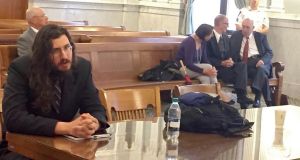 Michael Rotondo sits during an eviction proceeding in Syracuse, New York, US, brought by his parents, Mark and Christina. Photograph: Douglass Dowty/The Syracuse Newspapers via AP

A New York state judge has backed a couple’s battle to kick their 30-year-old son out of their home because he has not contributed toward household expenses or helped with chores and they wanted him to get a job.

Judge Donald Greenwood of the New York State Supreme Court on Tuesday ordered Michael Rotondo to leave his parents’ home in the town of Camillus, about 320km northwest of New York City, according to Anthony Adorante, an attorney for the parents, Mark and Christina Rotondo.

Adorante declined further comment on the decision, which ended a four-month legal battle.

In court documents, Michael Rotondo referred to a “common law requirement of six-month notice to quit” before a tenant may be removed.

“I just wanted a reasonable amount of time to vacate, with consideration to the fact that I was not really prepared to support myself at the time where I was served these notices,” the younger Rotondo told local CBS television affiliate WSTM.

“I don’t see why the judge wants to throw people on the street.”

Rotondo told the station he was employed but declined further comment. Attempts by Reuters to reach him were unsuccessful.

His parents said they have tried to get their son to leave their home for several months, according to court filings. The documents included five written notices that the couple said they began sending him on February 2nd.

“After a discussion with your mother, we have decided you must leave this house immediately,” the couple wrote in one of the letters. “You have 14 days to vacate. You will not be allowed to return.”

In another note, the parents offered him $1,100 to help him look for a job and an apartment and shared advice on how to manage on his own.

“There are jobs available, even for those with a poor work history like you. Get one, you have to work!” one of the letters read. In the second-to-last letter, on March 5th, the parents warned they would take actions to make sure he left the home.

Michael Rotondo said he planned to appeal the ruling. – Reuters