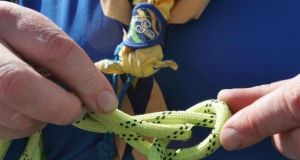 Taoiseach Leo Varadkar and senior Ministers on Friday backed the decision to withhold future State funding from Scouting Ireland until governance concerns with the organisation are resolved.

Minister for Children Katherine Zappone suspended the organisation’s annual grant of nearly €1 million on Thursday. The decision followed details reported in The Irish Times of the organisation’s handling of a 2016 allegation by a female scout leader who claimed that she was raped by a male leader seven years earlier.

Speaking on Friday in Co Limerick, Mr Varadkar said several details of how the case was handled had caused “concern”.

“Minister Zappone has taken the decision to suspend funding for Scouting Ireland until we can really get the facts, and I think that’s an appropriate decision and swift action by her,” he said.

A confidential review of the case carried out by child protection expert Ian Elliott found that, despite advice from gardaí, the male leader accused of rape was not submitted for Garda vetting before he was reinstated.

He was promoted to a more senior role a number of months after his suspension was lifted when the Director of Public Prosecutions did not to prosecute the case.

Scouting Ireland chief executive Dr John Lawlor said the State funding was “vital” to the organisation, which has 40,000 juvenile members, 13,000 adult volunteers and a small number of professional staff.

Scouting Ireland received €876,337 in funding from the Department of Children last year, and has received more than €9 million since 2010.

Dr Lawlor said the board of Scouting Ireland had committed to addressing concerns raised by Ms Zappone “without delay”.

“We have been engaged in a comprehensive review of our governance structures over the past 12 months,” he said, and a long-awaited overhaul of the organisation’s board structure would be proposed to the membership at an egm in the autumn.

“We have to be assured that any body that has responsibility for children is applying the highest possible standards,” Mr Bruton said on Friday.

“Until that’s established I think the Government has to take the approach that Minister Zappone is taking,” he said, adding there were “clearly” wider child protection issues at stake.

The decision to withhold future State funding until governance concerns are resolved is likely to provoke internal turmoil at the organisation’s national council on Saturday.

Chief scout Christy McCann is running unopposed for a second term as head of the membership at the agm.

Mr McCann was criticised in the confidential report over an undisclosed meeting he held with the subject of the complaint in January 2017, while the man was under suspension.

An internal crisis management group, set up in response to the Elliott report, recommended Mr McCann and two other senior volunteers should resign, but none have done so.