Ulster Rugby and IRFU officials under pressure from sponsors 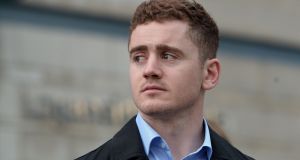 Paddy Jackson was cleared of the charges on March 28th. Photograph: Pacemaker

Ulster Rugby and IRFU officials are coming under increasing pressure from sponsors to effectively deal with “issues” raised during the trial of Paddy Jackson and Stuart Olding.

Official Ulster Rugby shirt sponsor Bank of Ireland (BoI) has said it is “highly concerned” about the “serious behaviour and conduct issues” that emerged in the trial involving the two players, who, at Belfast Crown Court last month, were cleared of raping the same woman in 2016.

The bank, a key sponsor of the club for 20 years, has been in touch with Ulster Rugby chief executive Shane Logan regarding the case.

Following the conclusion of the trial on March 28th when both men were cleared of all charges, and two of their friends were also acquitted on related charges, Ulster and the IRFU said they were conducting an internal review into the two players who have been “relieved of all duties” since the legal process began.

The degrading and offensive WhatsApp messages exchanged between the players and their friends, including another rugby player Craig Gilroy, who is also subject to the internal review over a message he sent Mr Olding, were under intense scrutiny during the trial and since its conclusion.

Street demonstrations have taken place in cities across Ireland, and a feminist protest planned for outside Ulster’s Kingspan Stadium in south Belfast is scheduled for Friday evening.

Kingspan, which is headquartered in Cavan, is the main sponsor of Ulster Rugby. It has been a partner since 1999 and in the summer of 2014 announced a 10-year agreement for the naming rights of the stadium.

A spokesman for the company did not respond to a number requests for a statement. A spokeswoman for main kit sponsor Kukri Sports said: “I have no comment.”

A spokeswoman for another official shirt sponsor, BT, said: “As a sponsor of the team, we have been in contact with Ulster Rugby.

“We note that the players concerned will continue to be relieved of all duties while the IRFU and Ulster Rugby internal review is under way, and we await the findings.”

A spokesman for shirt sponsor Go Power said: “Our legal team have been liaising with their PR department.”

All other “official” or “domestic” sponsors listed on the Ulster Rugby website were contacted by The Irish Times on Thursday.

SONI (System Operator for Northern Ireland) spokeswoman Natasha Sayee said its concerns had been expressed to Ulster Rugby and it awaited the outcome of the review.

“As sponsors of the Ulster Rugby Premiership, we seek to support the values of respect, integrity and inclusivity at community and grassroots level,” she said.

“It is vital to SONI that the outcome of the review addresses all of these issues.”

Danske Bank is the official sponsor of the Ulster Schools’ Cup competition held each year from November to March, plus the Girls Schools’ Cup and High Schools’ Trophy.

A statement said: “Danske Bank has not taken a formal position on the matter, nor have we had any contact with Ulster Rugby.”

A Moy Park spokeswoman said: “The company is an official supplier to Ulster Rugby. It would be inappropriate to comment further as Ulster Rugby and the IRFU are conducting an internal review.”

A Dale Farm spokeswoman said: “Dale Farm fully respects Ulster Rugby and IRFU’s current internal investigation and as such is not in a position to comment on this matter.”

An Ulster Carpets spokeswoman said: “Ulster Carpets are fully aware of the situation and will be awaiting the outcome of the review being carried out by Ulster Rugby and the IRFU before making any comment.”

A Deep River Rock spokeswoman said it would not be commenting on this matter.

A Maxol spokesperson said: “Maxol sponsors the Ulster Mini Rugby Festivals programme which aims to give young players aged 6 - 12 years old their first taste of the sport as well as learning the basic skills that go behind it. On other matters we don’t feel it is appropriate to comment at this time.”

An Ulster Rugby statement said: “The IRFU and Ulster Rugby have advised that a review process in relation to this matter is underway and it would be inappropriate to comment on any matter pertaining to that process until it is completed.”

In the “sponsorship opportunities” section of the Ulster Rugby website it says it and the IRFU Ulster Branch are “committed to building a team from grass roots level up, making this the perfect opportunity for sponsors keen to harness a community ethos, not just in Northern Ireland but with border counties in Ulster”.