Ireland and Ulster rugby player estimated to have spent more than €100,000 on lawyers 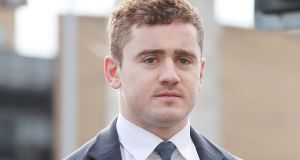 Ireland and Ulster rugby player Paddy Jackson is attempting to recover the legal costs from his rape trial.

The 26-year-old was unanimously acquitted of rape and sexual assault last month.

He is now seeking to retrieve all or some of the money spent on legal representation during the nine-week trial at Belfast Crown Court. His legal costs are estimated to be well in excess of €100,000.

A hearing on the matter is expected to take place before trial judge Patricia Smyth next month.

Jackson and Ireland and Ulster team mate Stuart Olding (25), were found not guilty of raping the same woman in June 2016 by a jury which deliberated for three hours and 45 minutes after hearing all the evidence in the marathon trial.

Two other men - Blane McIlroy (26) and Rory Harrison (25) - were also unanimously acquitted of lesser charges connected to the alleged incident.

Mr Jackson had privately funded his case and was represented in court by two defence counsel and a solicitor.

Lawyers are expected to make an application to recover the costs from the Public Prosecution Service.

Mr Olding was granted legal aid about half way through proceedings. Until that point, he had been funding the case personally and with financial assistance from family and friends, the court was told.

The high profile trial which ran for 42 days was among the longest ever heard in Belfast.

It generated unprecedented level of public interest and sparked rallies and petitions in support of the complainant as well as the defendants in the case.

Reporting restrictions which had prevented publication of legal argument in the absence of the jury were lifted by Judge Smyth on Wednesday.

The hearing on costs is due to take place at Belfast Crown Court on May 18th.