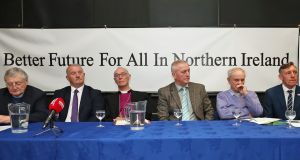 The father of a man murdered by the UVF has dismissed a statement from loyalist paramilitaries rejecting criminality as “nonsense”.

Victims campaigner Raymond McCord, whose son Raymond was murdered by the UVF in 1997, says the UDA, UVF and RHC need to disband and dismissed their latest public statement as “nonsense”.

“Why are the paramilitaries still here?” he said.

“Being a member of a proscribed organisation is even a crime, and sure I am living with a death threat. They have told us this same thing many times before and murder, beatings, shootings, drugs and extortion have continued.

He said the organisations are looking for “funding and a cloak of respectability”.

“They need to disband.”

Earlier on Monday, The Ulster Defence Association (UDA), Ulster Volunteer Force (UVF) and Red Hand Commando (RHC) issued a “declaration of transformation” on Monday, their first joint statement since the loyalist ceasefire in 1994, which suggests any members involved in crime will be expelled.

“We fully support the rule of law in all areas of life and emphatically condemn all forms of criminal activity,” the statement said.

“Individuals who use criminality to serve their own interests at the expense of loyalist communities are an affront to the true principles of loyalism.

“We reject and repudiate as unacceptable and contrary to loyalist principles any criminal action claimed to have been undertaken in our name or attributed to any individual claiming membership of our organisations.”

The statement also said: “We further declare that any engagement in criminal acts by any individuals within our organisations will be regarded as placing those persons outside the memberships. This has been collectively agreed.”

The PSNI and security sources have said some loyalists remain heavily involved in crime.

The statement was issued to coincide with the twentieth anniversary of the Good Friday (Belfast) Agreement. UDA veteran Jackie McDonald said it was made with the backing of the church leaders who took part in a news conference at Belfast’s Linen Hall Library along side loyalist leaders.

“Genuine loyalists won’t have problem with it (the statement),” Mr McDonald said.

He added: “I have no intention of letting these men down.”

Rev Good said his relationship with the loyalists was built on trust and he does not anticipate a breach of that trust, but if it were to happen honest exchanges would talk place to fix any problems.

“History has been bedevilled with exclusion,” he said. “It is time to understand the need of taking the step toward inclusion.”

Rev Good also told The Irish Times the stalemate at Stormont was “an issue for everyone” including the loyalists.

“They feel they are part of the Good Friday Agreement, facilitating it, and we know it wouldn’t have been agreed without their participation,” he said. “Naturally they feel it’s very sad and regrettable that there is stalemate.”

Rev Good said they do not identify a particular politician or political party as a villain but “the whole lot collectively need to get together”.

“We would hope all the parties might take note of what happened today,” he said.

Sinn Féin policing spokesman Gerry Kelly MLA said people wanted to hear these groups are “leaving the stage rather than the same recycled statement of intent to end criminality”.

He said there was no place for any armed group in 2018 and the public want and end of “their ongoing recruitment, their procurement of weapons and an end to their existence”. “

In the last year alone, members of these groups have been involved in murder, drug dealing, extortion and intimidation, including racist attacks, he said.

“We need to see leadership from political unionism to bring an end to groups like these rather than the often selective condemnation of their activities while engaging with them in cosy electoral pacts.”

UUP leader Robin Swann welcomed the statement, adding “it will not be measured by the words it contains, but by the deeds that back it up and the difference felt in the lives of people living within loyalist communities”.

“It stands in stark contrast to Gerry Adams’ latest justification for violence,” she said. “It is time for those who use criminality, to get off the backs of their communities. Their objectives are not political but rather power and profit. I support the police in putting them out of business and behind bars once and for all.”

She said the DUP wants to “build a Northern Ireland for the next generation which is free from violence and where no community is left behind”.