Scouting Ireland’s €1m in State funding to be withheld 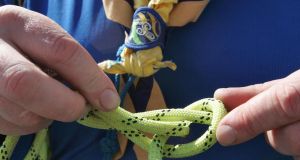 Scouting Ireland received €876,337 in funding from the department last year, and more than €9 million since 2010. Photograph: Brenda Fitzsimons

State funding of nearly €1 million a year is to be withheld from Scouting Ireland until concerns over the governance of the organisation are resolved, Minister for Children Katherine Zappone has said.

Ms Zappone said she was “very concerned” with the organisation’s handling of an allegation made by a female leader in 2016 about a rape during a camping trip seven years earlier.

“In light of the serious nature of recent media coverage the Minister has decided to withhold funding from Scouting Ireland until such time as she is satisfied with the governance of the organisation,” a spokesman for Ms Zappone told The Irish Times.

There was particular concern that despite advice from gardaí, the alleged offender was reinstated without undergoing Garda vetting. The man had been suspended while the investigation was being conducted.

The male leader was reinstated last year, after the Director of Public Prosecutions did not proceed with the case. He was promoted to a more senior role after a number of months.

Details from the confidential review into the handling of the case, carried out by child safety expert Ian Elliott, were reported yesterday by The Irish Times.

The decision to withhold future State funding until governance concerns are resolved is likely to provoke internal turmoil ahead of the organisation’s national council on Saturday.

A spokesman for Ms Zappone said she was not previously aware the male leader had been reinstated “without further Garda vetting” nor of the individual’s “subsequent promotion”.

A summary of Mr Elliott’s review, obtained by The Irish Times in February, found the handling of the rape allegation was “deeply flawed”. In early March, Ms Zappone received a requested copy of Mr Elliott’s report into Scouting Ireland’s safeguarding policies.

However, Scouting Ireland chief executive Dr John Lawlor said the case review was being withheld, due to an ongoing independent investigation into its findings, which “we are very anxious not to prejudice”, he said.

Correspondence between Ms Zappone and Scouting Ireland was obtained under the Freedom of Information act.

Dr Lawlor has agreed to appear before the Oireachtas committee on Children and Youth Affairs to answer questions on the organisation’s child protection standards. Committee chair Alan Farrell TD said he was “deeply concerned” with the details of Mr Elliott’s review.

An internal crisis management team, convened to deal with the report’s fallout, recommended three senior volunteers criticised by Elliott’s report should resign. The officers – chief scout Christy McCann, David Shalloo and Thérèse Bermingham – have not stepped aside and no further action has been taken.

Mr McCann, who is running unopposed for a second term as chief scout at the organisation’s national council, criticised the legitimacy of the internal group’s recommendation, stating it was “an ad hoc team of senior personnel”, in a statement to the organisation’s membership on Wednesday.

The crisis group “had no role, authority or mandate to make any recommendation”, he said.