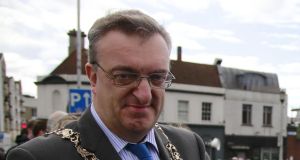 Lord Mayor of Dublin: “I have one message for the mayor,” Binyamin Netanyahu wrote on Facebook of Mícheál Mac Donncha. “You should be ashamed of yourself.” Photograph Nick Bradshaw

The Lord Mayor of Dublin has denied being anti-Semitic after he was criticised by the Irish Jewish community and Israel’s prime minister for attending a conference in Palestine this week.

The Sinn Féin councillor Mícheál Mac Donncha returned home on Friday after being informed by Israeli authorities at Ben Gurion airport that if he wished to return to the country he would have to seek special permission.

He rejected criticism for attending a conference this week in Ramallah that featured a large banner with an image of Hajj Amin al-Husseini, the pro-Nazi Palestinian mufti from the 1930s and 1940s.

“I didn’t know the image at the conference was of Hajj Amin al-Husseini. It was only brought to my attention afterwards,” he told The Irish Times. “I totally reject the accusation that I am or have ever been anti-Semitic.”

Mr Mac Donncha was invited by the Palestinian ambassador to Dublin to attend the conference, which focused on the status of Jerusalem in the wake of its recognition by the Trump administration as Israel’s capital.

Israeli Immigration Authority releases a video of @LordMayorDublin leaving the country this morning & signing a form prohibiting him from returning without permission (which he will probably never receive). And now they have his real name... pic.twitter.com/eIWg5T6dBD

This is the form he signed pic.twitter.com/7twiObC9uG

“I have one message for the mayor,” the Israeli prime minister, Binyamin Netanyahu, wrote on Facebook. “You should be ashamed of yourself.” He said “evidence” had been published in his book on the mufti’s collaboration with the Nazis during the Holocaust.

Mr Mac Donncha was also criticised by the Jewish Representative Council of Ireland, which said it was distressing that he had attended a gathering glorifying the anti-Semitic leader.

On Thursday Israeli foreign-ministry officials made it clear to Ireland’s Ambassador, Alison Kelly, that Israel expected a public and official Irish response to the conduct of Dublin City Council and the mayor, accused by Israel of conducting a campaign of anti-Israeli discrimination and hatred.

The Israeli authorities banned most participants from abroad attending the Ramallah event, but Mr Mac Donncha managed to pass through Ben Gurion airport on Tuesday night after Israeli officials misspelled his name on the warrant issued to prevent his entry to the country.

Conference speakers stressed the need to protect the holy sites in Jerusalem and criticised what they described as attempts by the Israeli authorities to “Judaise” the city.

“The criticism from Mr Netanyahu falls into the pattern of labelling as anti-Semitic anyone who criticises Israeli policies and, more importantly, of trying to prevent critics of Israel from travelling to the country,” Mr Mac Donncha said.

He stressed that he was a friend of the Jewish community and had hosted the Dublin Holocaust Memorial ceremony.

Hajj Amin al-Husseini was a Palestinian Arab nationalist and Muslim leader in Mandatory Palestine. He met Hitler in 1931, sided with the Nazis in the second World War and is seen as influential in introducing radical anti-Semitism to Islamic fundamentalist thought. In 1931 he organised the first conference on Jerusalem. The second conference was held in 2011, and this week’s event in Ramallah was the ninth gathering.