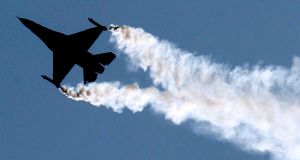 A US military plane has made an emergency landing at Shannon Airport. File photograph: Toby Melville/Reuters

A US military plane has made an emergency landing at Shannon Airport after experiencing a problem with an engine over the Atlantic Ocean.

The crew of the Lockheed C-130 Hercules transport plane were forced to shut down one of the aircraft’s four engines mid-flight after it suffered a technical problem.

Flight RCH-256 was travelling with two other aircraft at the time and was due to make a technical stop in Shannon.

About an hour before the aircraft was due to land at the airport, the crew declared an emergency over the engine problem and requested clearance to descend early.

It’s understood there were 30 crew and passengers on board the aircraft at the time.

Fire services from Shannon town and Ennis, a number of ambulances, and several Garda units were sent to the airport for the landing. The plane landed safely shortly before 7pm on Thursday.