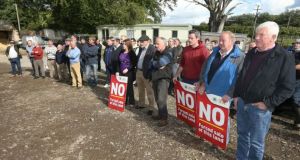 Protestors opposing the sale of the farm in Co Meath Photograph: IFA/Twitter

Farmers held a protest over the forced sale of lands in Co Meath by a so-called vulture fund which it claims is trying to force a family to sell some of their land to settle debts.

The land is due to be sold by Promontoria on an online auction in the coming weeks.

Two weeks ago brothers Gerry and Michael McCann learned their 38-acre farm holding that they paid over €1 million for in 2008 had been listed for auction on the BidX1 property site without their knowledge.

“We weren’t told anything. Someone rang us up and said your farm is up for sale. No one ever contacted us to say it was going up for sale,” Michael McCann told RTÉ news

Irish Farmers Association (IFA) Farm Business Chairman Martin Stapleton said the IFA would oppose the sale as it said the family is willing to implement a credible solution.

Mr Stapleton said he would be asking the farming community to stand together with the McCann family and stand back from any forced sale.

“Our debt support team has looked at this case in detail, we have sought professional advice and we are firmly of the view that this farmer has put a very credible proposal to make structured repayments.”

He said farm families should be given time to repay their debts over a longer term to keep the farm intact and that the IFA is standing behind those who are committed to implementing a credible solution.

“Vulture funds have no understanding of the family farm and they are focused only on getting their money. It is not acceptable for vulture funds to force a sale of land and cash in debts they have bought from a bank when there is a viable alternative,” he said.