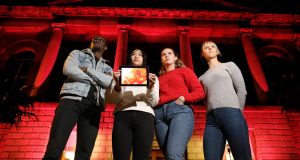 There are seven deaths per day in Irish hospitals from the “silent killer” sepsis, consultant microbiologist Dr Fidelma Fitzpatrick said on World Sepsis Day, which took place on Thursday.

Landmark buildings around the State were coloured pink as part of a campaign to help people recognise the symptoms of sepsis. These included the Convention Centre, the Mansion House and RCSI buildings in Dublin, as well as the Lourdes hospital and Millmount Museum in Drogheda, Co Louth.

The buildings were coloured pink in accordance with it being the official colour of World Sepsis Day, as confirmed by the Global Sepsis Alliance.

Awareness of the condition has grown considerably since the death of Savita Halappanavar in a Galway hospital more than five years ago.

Former Dublin footballer Ciaran Whelan has also spoken of how sepsis almost cost him his life when he contracted it in his left leg after initially believing he had a bout of flu.

“RCSI is urging people to recognise the signs and symptoms of sepsis, a silent killer associated with seven deaths per day in Irish hospitals,” said Dr Fitzpatrick, consultant microbiologist at the RCSI, which is running the campaign.

Sepsis can occur following an infection in any part of the body or from a simple cut or graze when that infection affects the function of the body’s organs. Sepsis is a life-threatening condition that can be managed effectively if caught early.

“Sepsis can kill in less than 12 hours and it must be diagnosed early because every hour delay increases the risk of death,” said Dr Fitzpatrick. “Increasing awareness will reduce the number of preventable deaths associated with this condition.

According to research published by the National Sepsis Programme, almost 15,000 cases of sepsis were diagnosed in Ireland in 2016, resulting in 2,735 deaths.

“Sepsis is a time-dependent medical emergency,” said Dr Fitzpatrick. “For every one hour that antibiotics are delayed mortality goes up by 7.6 per cent and that increases exponentially. We are encouraging people to learn to spot sepsis and save lives.”

Prof Steve Kerrigan, associate professor in pharmacology at RCSI and inventor of InnovoSep, a potential new breakthrough therapy in the fight against sepsis, said doctors and researchers are continuing to work to find effective treatments.

“Public awareness is what will really save lives,” he said. “It is critical that people learn to spot the signs and symptoms of sepsis so that they can get to the hospital and initiate treatment as soon as possible.

“This is important as sepsis destroys lives, families and communities and sepsis deaths are preventable if people can recognise the signs and symptoms.”