Up to 40 in North targeted in ‘sextortion’ scam

Victims told X-rated photographs would be sent to families if they did not pay £2,000 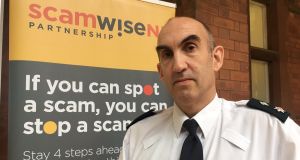 About 40 people in Northern Ireland have been targeted by so-called sextortion scams since Thursday, according to police.

The majority of the scams involved emails in which the recipients were threatened that if they did not pay £2,000, X-rated or compromising photographs of them would be sent to their families, or images or footage of them accessing pornographic websites would be released.

The police said others were phishing emails where the scammers tell the recipient they have their password in an attempt to convince them they are a genuine threat. They claim they have access to indecent images of the recipient, and threaten to release them publicly if they do not pay £2,000.

The Police Service of Northern Ireland (PSNI) said the scam emails were sent between Thursday and Saturday, and most of the attempts targeted people in counties Antrim, Derry, Down and Tyrone.

There were also a small number of scams of what police described as “of the more traditional type”.

These involved scammers who “have claimed to be calling from a bank and have asked people for their bank details, or where someone has been told they are due a refund after their MoT was cancelled and they need their bank details to issue the refund.

“One report was about workmen taking money from a householder for work yet to be completed,” the police said.

Chief Superintendent Simon Walls said that “thankfully, in relation to the reports we have received in the last few days, people appear to be aware of the fraudsters and it appears they haven’t fallen for their scams.”

He said that with young people now spending more time at home because of the coronavirus outbreak, parents should take extra care to monitor their children’s activity online.

“It’s really important that parents and guardians know what their loved ones’ online activity is, who their children are engaging with and what sites they are visiting.

“It’s also important people have a conversation with their loved ones, and with each other, so they are aware of the extraordinary lengths scammers will go to and the abhorrent tactics they will employ.

“And, to any young person who may receive or has received one of these emails, please don’t worry. Speak to your parent/guardian or someone you trust and do not reply to the email.”

Chief Supt Walls said people should never give out personal or financial information to an unverified source via email or over the phone. If scammers claim to have their password, they should change that password as soon as possible.

“I would urge people to be aware of cold callers and people claiming to carry out work on their house for a price, which will often be too good to be true. Be on your guard and do what you can to protect yourself financially.”

He said anyone who received a suspicious email should not interact with or reply to the scammers, but should forward the details to Action Fraud and contact police.