Back to school? Partial reopening to be examined by health authorities - Simon Harris 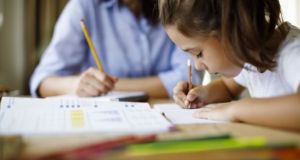 While secondary schools look set to remain shut for the remainder of the academic year, officials are monitoring the experience of Denmark which reopened its primary schools last week. Photograph: iStock

Health authorities are to examine the potential of reopening primary schools on a limited basis, such as one day a week, in the summer.

Minister for Health Simon Harris said officials will closely monitor the experience of other countries such as Denmark which reopened its primary schools last week.

He cautioned that any decisions regarding easing current restrictions will be taken on the basis of public health advice.

However, he said, on a personal level he saw there was merit in partially reopening primary schools if permitted by public health advice. Secondary schools look set to remain shut for the remainder of the academic year.

Such a step would be positive for the mental health and wellbeing of students and parents, he said.

“The issue of reopening schools is very much an open question,” he told The Irish Times on Sunday.

“All issues in relation to easing any restrictions will be considered by the National Public Health Emergency Team (NPHET) and will follow public health advice.”

Current public health restrictions are in place until May 5th, at which stage they will be reviewed.

Any easing of measures will depend on public compliance and the advice of public health experts.

It is understood that if primary schools do partially reopen, it is more likely to be take place in June and would be subject to social distancing measures.

In Denmark, for example, pupils’ desks are spaced apart and children are required to wash their hands on an hourly basis. At break-time, children are only allowed out in small groups.

Mr Harris also explained his personal views of why opening schools would be a positive development for children in an interview with the Sunday Independent.

“I’d like to see a situation whereby our schools could come back or at least could come partially back. Now I can’t guarantee the timeline for this, but in terms of you’re asking me the hierarchy of things, I’d like to see comeback that would be one of them,” he told the newspaper.

“That would be one of them because I think, for the mental health and wellbeing of students and parents, imagine if children could go into school, even one day a week [to] get the books, meet the teacher, get the homework for the week.

“From a socially distanced, safe point of view, meet their friends, and then go home. That would provide breathing space for families and information and I think that would help.”

In response to Mr Harris’s comments, the Irish National Teachers’ Organisation (INTO) said any decision to reopen primary schools must be led by public health advice.

“Engagement with workers and their unions must take place in advance of any such decision,” an INTO spokesman said.

“The health and safety of teachers, pupils and parents must be guaranteed before our schools reopen. We should look closely at the small number of jurisdictions where some schools have opened and endeavour to avoid repeating any mistakes that may have been made elsewhere.”

The spokesman added that primary teachers were ready to resume facilitating the continuity of learning remotely from Monday, following the Easter holidays.

School managers, teachers’ unions and other education partners, meanwhile, are meeting with the Department of Education on a weekly basis between now and the end of May to discuss issues relating to supporting students and the State exams.

Sources say the possibility of secondary schools opening later than normal in September and on a staggered basis has been discussed.

This could allow for classes to attend for part of the week and to continue remote learning for the rest of the week.