More than 100 coronavirus-related fines issued in North over Easter 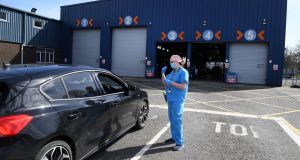 Medical staff direct cars at an MOT testing centre in Belfast which is being used as a drive through testing location for Covid-19. Photograph: Justin Kernoghan/PA Wire.

More than 100 coronavirus-related fines have been issued in three days in Northern Ireland, police said.

Some parents were also believed to have left their children to play at friends’ houses.

Mr Todd told the BBC’s Good Morning Ulster programme: “We engage with people, it is only when people won’t take the encouragement we end up having to enforce the matter.”

A total of 107 fines were imposed in three days over the Easter period.

House parties involved some dozen or more people, although some were bigger, Mr Todd said.

Police stepped up their patrols at coastal beauty spots over the weekend and said the majority of people complied with restrictions designed to limit spread of the virus.

Meanwhile, GPs in Belfast have written to the Department of Health warning they may be forced to withdraw services if more personal protective equipment is not provided.

Masks and aprons are in particular short supply.

Health officials have said they are confident enough supplies exist for now.

A large order was delivered from Great Britain last week for distribution.

1 Covid-19 incidence in the Republic set to surpass that of UK
2 Coronavirus: Non-essential travel from US set to be banned within days
3 Taoiseach tested twice for Covid-19 but excused quarantine after Brussels trip
4 ‘Our hearts are broken’ – implications of fresh lockdown sink in
5 Motor dealer outlines EV reality on sales front
Real news has value SUBSCRIBE