Over 620 new confirmed cases processed by Irish labs, and 95 processed in a German lab

Another 43 people have died, the Chief Medical Officer Dr Tony Holohan has announced at the daily Department Of Health Covid-19 press briefing. The total number of people with the virus now stands at 13,271 in Ireland. Video: RTE News Now 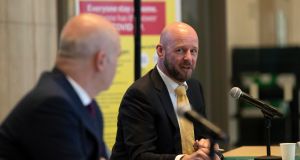 The deaths of another 43 patients - 22 males and 21 females - diagnosed with Covid-19 have been reported by the National Public Health Emergency Team.

Some 34 of the deaths were in the east, four in the west and five in the south. A total of 27 of the patients were reported as having underlying health conditions. There have now been 486 Covid-19 related deaths in the Republic. The median age of Thurday’s deaths is 84.

The number of newly confirmed cases of Covid-19 is peaking “around now” and should decline in coming weeks, Prof Philip Nolan of NUI Maynooth, who leads a team modelling trends in the epidemic, told a NPHET briefing on Thursday.

“We may have reached a plateau,” he said, though there remained “a delicate balance between suppression and spiking” of cases.

In each of the measures examined - new cases, ICU admissions and deaths - there has been a considerable slowing in their rate of growth, Prof Nolan said.

Since April 3rd, the growth rate in new cases has been “close to zero”, he said, while ICU numbers have been stable since that time.

The R0, or reproduction number, which measures the number of other people a confirmed case goes on to infect, now stands at between 0.7 and 1, he said, down from 4 in the early stages of the outbreak.

While this showed that the disease was being suppressed, it also showed that if the relaxation of measures was being contemplated “we have to be sure we don’t go back to a higher (R0) number”.

An R0 of less than 1.0 means that each infected person is passing on the virus to less than one person.

Chief medical officer Dr Tony Holohan said if the restrictive measures had not been introduced, NPHET would have been reported 7,800 new cases on Thursday, and there would be 800 people in ICU.

However, this “significant impact” had been averted, he said.

Prof Nolan outlined a number of possible scenarios that could happen were the restrictive measures to be relaxed after May 5th.

Were the R0 to increase by an amount up to 1.6, the number of cases would rise to a new peak, but this could be controlled through the re-imposition of measures after three weeks.

However, were the R0 to increase to 2.0, this would almost certainly result in an “unmanageable spike” in cases, he said.

“This is a clear signal that whatever happens has to be approached exceptionally carefully.”

If restrictive measures were maintained, it was possible the disease could be suppressed, he said.

“But then what do you do? It only take two or three people entering the country to restart it.”

Maintaining restrictions forever without thinking of restarting economic and social activity was “not a viable strategy”.

Of those hospitalised, 284 were admitted to ICU.

The number of cases associated with healthcare workers has now passed the 3,000 mark, at 3,090.

Of the deaths that have occurred so far, 298 or 61 per cent occurred in hospital and 44 were in ICU.

The median age of deaths was 82 years and the mean 69 years.

ICU admissions dropped again on Thursday to 156, and 90 patients have now been discharged from intensive care.

Dr Holohan said there have been 254 outbreaks in residential setting, of which 163 are in nursing homes.

Some 302 of the deaths so far have occurred in residential settings, including 253 in nursing homes.

“The data clearly shows that there are two very different experiences of Covid-19 in Ireland today. In the population at large, the virus is contained and effectively suppressed.

“However, the experience of the disease in long-term residential care settings continues to be a source of concern.

“In order to protect the vulnerable the first task was to suppress the virus in the population at large. We are increasingly confident that we are achieving this. All of our efforts now need to be on extinguishing Coivd-19 in our community residential settings, including nursing homes.”