Joe Junker among 1,040 crew still on board ‘Ruby Princess’ off coast of Sydney, Australia 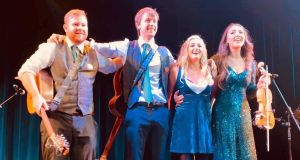 Emerald Tide members (left to right) Killian Shannon, Joe Junker, Giselle O’Meara and Kate Heneghan are among more than 1,000 people stuck on a cruise liner off the coast of Sydney, Australia.

A group of Irish musicians stranded on board the Ruby Princess cruise ship in New South Wales, Australia have said they’re desperate to return home to their families after nearly four weeks of quarantine in their cabins.

The band members are among the 1,040 crew members still on board the cruise ship which is currently docked at Port Kembla, south of Sydney.

The cruise ship made international headlines in March when it docked in Sydney and allowed its 2,700 passengers to disembark despite some people on board showing coronavirus symptoms. This has been linked to hundreds of Covid-19 cases and more than a dozen deaths in Australia.

However, Co Kildare native Joe Junker and his band mates do not know where the ship is going. Like most crew, Junker is worried about the low level of testing being carried out among staff and says if people become ill at sea it could lead to “serious illnesses and complications” with little medical assistance available.

A total of 140 crew members have tested positive for the virus with an additional 12 crew members with Covid-19 now in local health facilities, according to local media reports. However, Mr Junker understands that only 250 crew have been tested.

The four ‘Emerald Tide’ musicians have been working on board the cruise ship since early December. On March 21st they were placed under quarantine because one member was exhibiting virus symptoms.

While Junker says the cruise company is treating staff well – housing them in guest cabins and delivering three meals a day – people are fed up being cooped up for so long and becoming increasingly nervous about the limited medical support on board the ship.

“Throughout all this we have had no clue about what was going on and relying on social media and news to keep us informed with no information at all about when we will be going home,” Junker told The Irish Times. “Me and my band mates feel as though we’re hostages or pawns in this political battle which is not one of our making. We feel powerless in this situation.”

Junker is grateful for the support the band has received from Australian politicians and officials along with efforts by the Department of Foreign Affairs to get the group back to Ireland.

“We had an absolute blast on this ship before this all started bringing Irish music to all the guests, it went down a treat and we were a very popular band on board. We love playing music and still do it to keep us sane during the day. But what we really want is just to go home to our families.”

A department spokeswoman said she was aware of a case involving Irish citizens currently on board the Ruby Princess cruise ship.