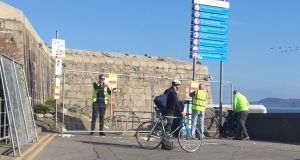 Dublin bathing spots Seapoint, Sandycove and the Forty Foot have been closed to the public until further notice. Photograph: Niamh Hooper.

The popular Dublin bathing spots at Seapoint, Sandycove and the Forty Foot have been closed to the public until further notice.

Dún Laoghaire-Rathdown County Council said the decision was taken on Saturday following consultation with gardaí and as a result of “concerns raised with social distancing compliance”.

In a statement on its website, the council said the areas will remain closed until further notice “to best align with Covid-19 restrictions and in the interests of public health”.

Gardaí confirmed the locations had been closed.

“The decision has been made by the relevant county council and not local gardaí,” a spokesman said.

Parking restrictions were put in place by the council at Sandycove, Vico Road and the Killiney Beach and Dart station car parks earlier this week.

The move came as members of the public were urged to comply over the bank holiday weekend with restrictions on movement introduced to combat the spread of the virus. The Government on Friday said the restrictions, including that people should remain with 2km of their homes, would stay in force until at least May 5th.

Gardaí have been given new powers to instruct people to return home, if they are travelling outside of 2km of their home without a valid, essential reason, with penalties for people failing to adhere to the orders.

Deputy Garda Commissioner John Twomey on Saturday said public compliance with the travel restrictions had been high so far this weekend.

However, gardaí on checkpoints were still noticing significant numbers of cyclists travelling more than 2km from home while exercising and people travelling excessive distances to get their shopping.

Mr Twomey said gardaí stopped one man travelling from Tipperary to Limerick to buy a trampoline.

“My message to the general public is to stay at home, stay safe and do not venture out unless it’s for one of the exceptions provided for. Remember, we’re all working together to try stop the spread of Covid-19,” he said.

Mr Twomey also urged elderly and vulnerable people to contact their local garda station or community policing unit if they have any needs or concerns. “We will help you in whatever way you can.”

The PSNI on Friday said it had fined a number of people for breaching the social distancing rules in Northern Ireland.