Coronavirus: 44 more deaths reported in Republic as cases near 14,000

Testing to be expanded with 100,000 carried out every week for at least next six months

Dr Tony Holohan has said that the chartering of flights to bring workers into the country is "not consistent with the public health advice", when asked about the Keelings/Ryanair controversy. Video: RTE News Now 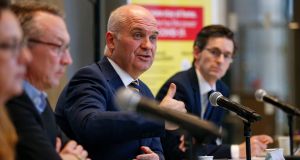 Speaking at a media briefing, Dr Tony Holohan said while we are suppressing the disease among the general public, we cannot afford to become complacent. Photograph: Crispin Rodwell

Coronavirus testing is set to be significantly expanded with 100,000 tests carried out every week over at least the next six months, the Department of Health has said.

Testing of the 30,000 staff and 28,000 residents in nursing homes is also set to be prioritised over the next 7-10 days as part of a series of new measures outlined on Friday.

This prioritised testing, which began on Friday in the east of the country, will also be carried across the 2,600 beds in mental health facilities and 8,300 beds in residential care facilities for people with disabilities, the department has confirmed.

An additional 44 people have died from the virus, also known as Covid-19, bringing to 530 the total number of deaths in the country. Of the 44 deaths reported on Friday, 25 were men and 19 were women while the median age was 84. Some 25 of these had underlying conditions.

A further 597 cases of the virus have been reported by Irish laboratories along with an additional 112 cases confirmed by a laboratory in Germany, bringing to 13,980 the total number of cases in the Republic of Ireland.

Speaking at Friday’s press briefing, chief medical officer Tony Holohan clarified that the figure of 44 indicated the number of deaths notifications and not the number of people who had died in the previous 24 hours.

The highest number of deaths on a daily basis was in fact on April 7th when 39 people died in one day with numbers falling in the 10 days since then. However, Dr Holohan underlined that the drop in numbers should not be interpreted as a drop in mortality.

“There is always a time lag in reporting,” he said. “Notifications have been increasing which is good . . . don’t conclude that the drop off (at the end of the graph) is a real drop off. It could just be a delay in numbers, we need to wait to understand those numbers.”

Dr Holohan said he expected the number of Covid-19 related deaths to rise once a census of mortality is carried out. The census, which was announced on Friday, will examine all deaths that have taken place in Ireland since January 1st 2020. The goal of the census it understand the “pattern of mortality” caused by the virus, he said.

“We might identify some additional cases of Covid related deaths which isn’t to say that we necessarily think that there’s something large we’ve missed,” he said.

Of the total 530 deaths from the virus recorded so far, 58 per cent were male and 42 per cent were female. The age range for these deaths was 23-105 years and median age was 83.

Dr Holohan confirmed that 98 people had been discharged from ICUs so far.

The Health Information and Quality Authority is set to publish a Covid-19 quality assurance framework which will examine the preparedness of the nursing home and residential care sector and actions previously put in place to stem the flow of the virus, the department said.

Dr Holohan urged members of the public not to move family members out of nursing home settings, saying “everything is being done” to ensure people in these care settings receive quality care.

HSE chief clinical officer Dr Colm Henry echoed these sentiments, saying nursing homes were in the “safest” and “most effective” place for older, more vulnerable people to cocoon. He acknowledged that should additional cases of the virus arise through the prioritised testing of staff and residents, conditions in some older centres could become “very challenging”.

On the topic of foreign nationals arriving in Ireland for seasonal work, Dr Holohan said he was “not comfortable” with reports that 189 Bulgarian fruit pickers had arrived into Dublin airport this week. He said only became aware of their arrival through news reports and that he would continue to address travel arrangements in place at airports and sea ports.

The Government will continue to follow the progress of other European countries who have started reducing restrictions, he said, adding that it would take between two and three weeks to fully understand the implications of these changes in terms of the spread of the disease.

Asked whether people who had still not received an answer on a Covid-19 test after weeks of waiting should just forget about the results, Dr Holohan said it may have been the case that some tests that came back negative had not been communicated to people. The goal is to ensure the increased testing is carried out in real time with same day or next day results, he said.

Earlier on Friday, the HSE said that all staff and residents in residential homes that have had confirmed Covid-19 cases are to be tested for the disease.

An outbreak is one case or more, whereas a cluster is two cases of disease or more.

Of the total number of outbreaks, 196 are in nursing homes, though another 49 involve centres where older people are resident. Geographically, the largest number of cases – 86 – are in Dublin.

The growth in outbreaks in residential centres has levelled off in the past week after a period of steep increase earlier in April, according to Ms O’Connor.

Many of the key symptoms of Covid-19 seen in most patients may not appear in older patients because their immune system has weakened over time, HSE chief clinical officer Dr Colm Henry said. With features such as fever or a cough not present, the disease may be much more difficult to detect.

Detecting changes in the condition of bed-bound patients can also be challenging, he said.

Ms O’Connor said that traditionally nursing homes had a relation with the Health Information and Quality Authority but increasingly in this epidemic, the HSE is “putting our arms around” them.

Officials said requests from private hospitals for personal protective equipment had shown significant growth over the past two weeks.

The Citywest convention centre, which is being used by the HSE as an isolation centre for Covid-19 patients, has been booked for the rest of the year, she confirmed.

Officials said requests from private hospitals for personal protective equipment had shown significant growth over the past two weeks. Ms O’Connor said private facilities were not being treated any differently from other parts of the health service in the allocation of PPE.

Citywest convention centre, which is being used by the HSE as an isolation centre for Covid-19 patients, has been booked for the rest of the year, she confirmed.

With cases of the virus reported in 30 per cent of homes, officials were asked what reassurance they could give to residents of unaffected homes and their families.

Dr Henry said homes now had a much “greater, richer and deeper” link with their local hospitals than heretofore. There was also a “heightened sense of awareness” of the disease, with a lower threshold for diagnosis, while consultant geriatricians were available in many locations to provide advice.

Asked why cases of the disease had surged so much in residential centres in recent weeks, Dr Henry said it was highly contagious and had a severe impact on older people. Because the virus was presenting “atypically” it may not have been picked up quickly.

“Time will tell whether action should have been taken earlier,” he said, adding that “the same story has been replicated across Europe”.