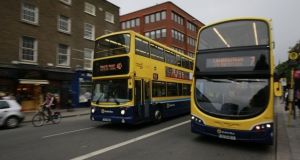 The National Bus and Rail Union (NBRU) has said it will not agree to any new Dublin Bus routes being introduced or any extension to existing services unless appropriate facilities are put in place. File Photograph Nick Bradshaw

The National Bus and Rail Union (NBRU) has said it will not agree to any new Dublin Bus routes being introduced or any extension to existing services unless appropriate facilities are put in place for staff.

The union warned that a row was brewing over the lack of appropriate wash and sanitation facilities for Dublin Bus personnel and that this could lead to disruption for passengers.

The union is concerned that drivers may have to operate cross-city services running for an hour and half from one terminus to the other.

The general secretary of the NBRU Dermot O’Leary told its biennial conference in Cork on Friday that it would put both Dublin Bus and the National Transport Authority (NTA) on notice, in the absence of any tangible commitment, that “we will not be held responsible for disruptions to service(s), as a result of a bus driver having to take a bus out of service to avail of such [wash and sanitation] facilities”.

“We will also inform Dublin Bus that route extensions or new routes will not be agreed in the absence of proper wash and sanitary facilities. The clock is very much ticking on this issue, it will come to head, sooner rather than later, unless the employer and NTA act.”

He said the union would demand that Dublin Bus meet its obligations under workplace legislation with immediate effect. He said the union would also press on the NTA that it has a responsibility to ensure that the infrastructure is provided to enable bus drivers to have access to proper and appropriate wash and sanitation facilities.

Separately the NBRU also forecast that drivers at Go-Ahead, the independent company that won the contract to operate about 20 routes in Dublin, would demand pay parity with their colleagues in Dublin Bus.

He said there was “an alarming contrast between the terms and conditions in State-owned transport operators and those in the private sector”.