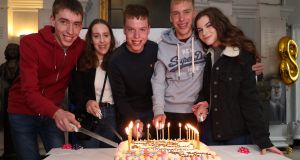 Conor, Amy, Cian, Rory and Derbhail Cassidy, Ireland’s only quintuplets, returned to celebrate their milestone 18th birthday at the Rotunda Hospital with the staff who spent several months caring for them following their birth in 2001. Photograph: Robbie Reynolds

Ireland’s only set of quintuplets have turned 18 years of age.

In August 2001 they arrived into the world weighing between 1lb 6oz and 1lb 11oz.

After weeks in the Neonatal Intensive Care Unit (NICU) of Dublin’s Rotunda Hospital following their birth on August 16th that year Conor, Cian, Rory, Amy and Derbhail Cassidy were eventually discharged home to mum and dad Veronica and Kevin Cassidy in Bridgetown, Co Wexford in November and December that year.

Their family have marked many milestones since then from first steps to their first day at school and another one was marked this week when they returned to the Rotunda to visit staff who spent months caring for them following their birth and share a birthday cake with them.

The quintuplets were born at just over 25 weeks gestation and their mum Veronica Cassidy says she was “quite worried” at the time.

“We didn’t think back 18 years ago that we would see this day but we have”.

“The girls didn’t come out until December 6th, they were there for quite a while so it was hard to juggle it all then but we did the best we could,” she recalled.

But she says every time she went into the neonatal intensive care unit she felt happy. “Every time I went in I was quite content”.

Professor Fergal Malone, master of the Rotunda Hospital, says for all five to survive in a healthy manner is extremely unusual.

Multiple births, he said, have become increasingly common in the last 10 years, “with about three in every 1,000 pregnancies being a twin, triplet or higher order multiple gestation”.

“There has been a 30 per cent increase in the number of successful twin births in the last two decades, which is due to wider availability of assisted reproductive technologies and older maternal ages at conception,” he said.

“However, the number of triplet, quadruplet and quintuplet births has halved, due to more effective controls on assisted reproductive technologies. With multiple births, there is a 95 per cent survival rate for twins, 70 per cent triplets and 50 per cent for quadruplets.

“It is clear however that quintuplets are very rare today, with the Cassidy quintuplets being the only set in Ireland, and the healthy survival rate of all five babies in a quintuplet pregnancy is quite exceptional.”

Ms Cassidy, who went from thinking at one scan that she was expecting twins to actually having the famous five, said the family went out to a local restaurant on Friday last to celebrate the siblings birthday and on Saturday night they threw a barbeque for family and friends.

“They definitely have a great connection, but like siblings they fight and they fall out and they’ll fall back in again. They’re quiet 18-year-olds really. They’ve always had each other so they don’t depend really on other people, more so on each other,” Ms Cassidy added.

“When they were smaller we tried to get them into sport and that and as they got older they found their own way and found what they liked. They’re totally different, real individuals.”

As the five now head into their Leaving Cert year they will have no shortage of support, as all attend the same school.