Ireland, along with five other European countries, has agreed to accept a "small group" of migrants from the Ocean Viking rescue ship, which has been drifting in the Mediterranean for two weeks. Video: Reuters 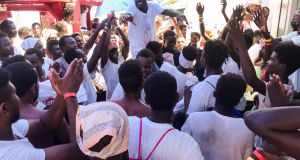 The Government has agreed to accept an as-yet undisclosed number of migrants from the Ocean Viking ship, which has been drifting in the Mediterranean for two weeks.

Some 356 migrants, mostly from Sudan, spent 14 days on board the Norwegian-flagged ship while it was denied entry by Malta and two requests to Italian authorities went unanswered, according to the two charities running rescue missions in the Mediterranean.

The Maltese prime minister said on Friday that he had agreed to allow the ship to dock after six European countries, including Ireland, stepped forward to accept the migrants on board. About 100 of the people on board the vessel are minors while 90 of these are unaccompanied, according to Medecins Sans Frontieres (MSF) which was operating the ship in partnership with French charity SOS Mediterranée.

It’s understood the Irish Government will accept a small group of people from the boat. France has committed to accepting 150 people while Portugal said on Thursday it would take up to 35 migrants. It’s not clear yet exactly how many people will be coming to Ireland from the ship.

The EU’s migration commissioner Dimitris Avramopoulos tweeted on Friday morning that a solution had been found for the people on board the Ocean Viking and that all would be relocated. Mr Avramopoulos commended the Maltese government and Malta’s prime minister Joseph Muscat for its “solidarity and European approach” and posted the flags of the six countries – France, Germany, Romania, Luxembourg, Portugal and Ireland – who had agreed to resettle the migrants. “These commitments must now be honoured swiftly”, he tweeted.

Taoiseach Leo Varadkar spoke by phone to Mr Muscat on Friday to confirm that Ireland will take a “small number of migrants from the Ocean Viking”, Government Buildings said.

A spokesman for the Department of Justice said that as “a gesture of solidarity with member states” Ireland had in recent months offered to relocate a number of asylum seekers from Italy and Malta. On arrival in Ireland, their asylum applications will be processed by the International Protection Office, he said.

Those who are relocated from Italy and Malta will be included in numbers admitted under the Irish Refugee Protection Programme (IRPP) which was introduced in 2015 and pledged to accept up to 4,000 people. A total of 2,555 people have arrived in Ireland to date under the various strands of the IRPP including 51 unaccompanied minors.

The Minister for Justice has decided to accept the relocation of “up to 100 asylum seekers” during the remainder of this year, the spokesman said. This figure takes into account the “extremely tight accommodation situation” that currently exists in Ireland while at the same time “showing solidarity with our EU colleagues”, he added.

Jay Berger, MSF project co-ordinator on board the Ocean Viking, welcomed the news of disembarkation in Malta but called on European governments to end the “prolonged delays and ad hoc petty negotiations” and set up as a matter of urgency a disembarkation mechanism for people rescued at sea. He also called for an end to forced returns to Libya and punitive actions against NGOs trying to provide assistance to people fleeing across the Mediterranean

“Was it necessary to impose two weeks of excruciating wait for rescued people to be disembarked,” asked Mr Berger. “These are people who have fled from desperate circumstances in their home countries and suffered horrific abuses in Libya. We’re treated the war-wounded who were trapped on the frontline of the conflict in Tripoli and seen the scars of those who lived through the Tajoura detention centre airstrikes.

“We’ve heard stories of brutal beatings, electrocution, torture including melting plastic and sexual violence with even children no exempt from these horrors. European States must take a hard look at the role they are playing in trapping people in these situations.”