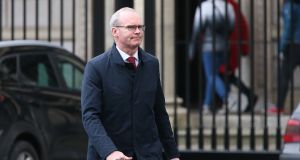 Commitments on legacy in the North must be implemented in full, the acting Tánaiste has told the new Northern Secretary during their first meeting.

Simon Coveney and Brandon Lewis met for the first time at Stormont House on Friday.

Mr Lewis was appointed last week after his predecessor as Northern Secretary, Julian Smith, was sacked by the UK prime minister, Boris Johnson, weeks after reaching the deal which restored the North’s power-sharing Assembly.

Speaking to reporters afterwards, Mr Coveney said they had a “good” and “cordial” meeting and Mr Lewis was someone who was “easy to talk to and get along with.”

He said that, as had been the case with Mr Lewis’ predecessor, “it’s really important that the two governments work together closely on a lot of very awkward and difficult political issues.”

He said he had spoken to Mr Lewis about the need to implement the legacy provisions of the 2014 Stormont House Agreement.

Mr Coveney and Mr Lewis also discussed the progress made by the North’s Executive and Assembly since its restoration last month, as well as the future negotiations over the relationship between the EU and the UK and the unique position and challenges faced by Northern Ireland now the UK has left the EU.

The New Decade, New Approach document, which restored power-sharing in Northern Ireland, includes a commitment to bring forward legislation to do so within 100 days.

Among these measures is the creation of a Historical Investigations Unit (HIU), a new, independent body which will investigate outstanding Troubles-related deaths.

“A number of the domestic challenges here in Northern Ireland I think are going to be very challenging for the new Secretary of State,” said Mr Coveney, “and I want to work with him on that, in particular in relation to legacy, the legacy of the past, how we deal with that.

“We have an agreement of course, the British and Irish Governments in Stormont House, And I spoke to him today about the need to implement that agreement in full and I think we’re going to work on that,” he said.”

Mr Finucane was shot dead in 1989 by loyalist paramilitaries who were working in collusion with the security forces.

Twelve months ago the Supreme Court ruled that investigations into Mr Finucane’s murder had not been effective and fell short of international human rights standards.

Speaking to reporters afterward their meeting with Mr Lewis, Mr Finucane’s his widow Geraldine said they had come “to hear the response of the government and what they intend to do.

“We did not hear anything from the government. They have not made up their mind what they’re going to do.

“The Secretary of State has said he has a report to read and when he has read that he will speak to the Prime Minister and they will make a decision in the case.

“He said that will happen in a matter of weeks, not months. I hope that is the case,” she said.

Mrs Finucane added that while Mr Lewis had not made the excuse that he was new in the job, “we did point out that in the past year there have been three Secretary of States and no decision has been made and it’s about time.”

Her son John, the Sinn Féin MP for North Belfast, said that while the family was “no further on” in regard to a response from the British government, “we have been given a commitment that their response will be forthcoming within weeks.

“We have been through this for 31 years so we will judge, if and when, the response comes within those weeks,” he said.