Fears of flooding increase as wind and rain warning issued 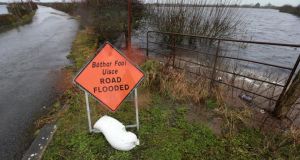 Met Éireann forecaster Linda Hughes said there is no evidence of any end in sight to the recent spell of bad weather and the Shannon, Moy and Corrib rivers are showing signs of flooding. Photograph: Laura Hutton/The Irish Times

Emergency personnel in Athlone are making contingencies as the River Shannon continues to rise following heavy rain in recent days.

Water levels at Athlone have risen by 60mm on Thursday and more rain is forecast over the coming days.

Met Éireann forecaster Linda Hughes said there is no evidence of any end in sight to the recent spell of bad weather and the Shannon, Moy and Corrib rivers are showing signs of flooding.

“With these spells of rain, there is not enough time for the rivers to stabilise so even a small accumulation is having an impact,” she explained.

“There isn’t any sign of a long period of high pressure over the country so the first few days of next week will be showery. There is more bad weather coming from the west on Thursday so there is no sign of any settled spell.”

Westmeath County Council said it is continuing to actively monitor water levels on the Shannon with regard to the current spell of unsettled weather and the forecast period of rainfall.

Westmeath County Council is continuing to actively monitor water levels on the Shannon with regard to the current spell of unsettled weather and the forecast period of rainfall.

At present water levels remain at approximately a metre below the highest level recorded in the winter of 2015/16 when the river last burst its banks and created flooding.

In a statement, the council added: “The River Shannon is a slow rising river due to the scale of the catchment area and this gives time for additional responses to be put in place when necessary.

“Staff in Westmeath County Council will continue to monitor river levels and are prepared for the deployment of defence measures, if required, should levels continue to rise over the weekend.

“The permanent flood defences already in place will provide significant protection to areas of the town that were affected in the past.”

A status yellow rainfall warning is in place for Donegal, Leitrim, Mayo and Sligo between 3am on Friday and 3am on Saturday with 25mm to 35mm forecast.

After the warning passes, it will be followed by more heavy showers most frequent across the north of the country.

Saturday will see further squally showers with the chance of hail and sleet in the northwest.

Saturday night will be wet in most places. After a brief respite on Sunday morning, more rain belts will cross the country on Sunday night.

Monday will be mild and showery, but Tuesday and Wednesday could see falls of sleet and snow in the west and north of the country as cold and windy conditions persist throughout the country.