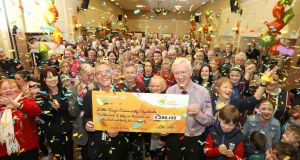 The residents of the townland of Drumgoon in Co Cavan celebrate after they were presented with a cheque for €256,142 by National Lottery officials. Photograph: Mac Innes Photography

It were one number away from winning €17 million, but the community in the parish of Drumgoon near Cootehill, Co Cavan, did not seem to care how close to serious money it had come.

The biggest syndicate in the history of the National Lottery had a party on Friday in the local community centre to celebrate a win of €256,142, which Aidan McCabe, chairman of the community centre, said was almost exactly what they had raised towards the development of the centre over a 40-year period.

“It’s a modest enough sum for each individual, but it’s lovely to see the money coming back to the community,” he said as the celebrations got under way in the centre known as Gallonray House in the townland of Maudabawn.

The 295 winners included former GAA president Aogán Ó Fearghail, whose home is across the road from the centre and whose family ran the local shop and post office for decades.

Retired school teacher Pat Farrell had spent Thursday night writing 295 cheques for €872.24 each, and when the party was over he directed the lucky winners to queue up for their prize in the meeting room at the centre where the facilities include a gym, a bar, a pre-school room and a hall.

Mr McCabe said the community has been united over the years in ensuring there was a focal point where they could meet and celebrate, and ensure that neighbours had a social outlet.

“The day is gone when latches are left off doors and when you’d see milk lorries going up and down the lanes,” he said. “Rural isolation is very real, and we need places like this to try and counter it.”

Mr Farrell estimated that in the 1920s there were 22 shops in the half parish but the only one still open was Maudabawn Co-op.

The most enjoyable part of the day for many locals was hearing how Google Maps had led National Lottery officials and members of the media on a merry dance as they tried to find the rural parish which is half way between Cootehill and Shercock.

Gallonray House is fancier than most community centres, and has catered for weddings and christenings. It has a weekly footfall at over 1,000.

“We have tried to get away from that idea of a community centre being a draughty hall,” said Mr McCabe, who said the syndicate had been started to try to raise €20,000 towards the €50,000 cost of converting the attic for much-needed after-school facilities.

The sweetener was that a portion of the €100 collected from 295 families was to be used for Euro Millions tickets over a 10-week period.

Eileen Shalvey (91), a member of the syndicate, has been involved in community work in Drumgoon since she arrived in the parish 70 years ago.

“I raised a lot of money for them over the years. I was a good beggar,” she joked.

“I helped get the water scheme going, and I started a camogie team in the parish 60 years ago. Mind you, I had seven daughters so that was a help when you’re starting a camogie team.”

Patrick Shalvey, a cousin, laughed at how close they came to winning €17 million, and was not doing the sums to see how much that would have netted each of the 295. He was happy enough to get almost €900. “I have it spent already.”

Ena Clerkin, who sold tickets to dozens of the syndicate members, said it would make her next fund-raising job easier. “Not one person refused – and thankfully they had all paid up.”