Wreckage of aircraft found at 4.30am after crash on Thursday 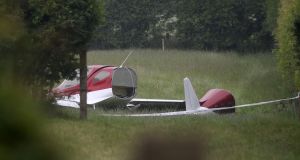 The scene of a light aircraft crash in Belan, outside Athy, Co Kildare on Friday in which two men died.

Two men have been killed in light aircraft crash in Co Kildare.

“A search was carried out by gardaí and with the assistance of Irish Coast Guard helicopter rescue 116,” the statement said.

It said the two men one aged 70 and the other in his late 50s were fatally injured in the crash and their bodies were taken to the mortuary in Naas General Hospital.

“The Air Accident Investigation unit are currently at scene and the Irish Aviation Authority have been notified”, the Garda statement added.

The chief inspector of the Air Accident Investigation Unit, Jurgen White is hoping to have a preliminary report within 30 days into the incident.

He told RTÉ radio’s News at One that at 3am on Friday he received a call from gardaí to say an aircraft had not returned to its base in Kilrush airfield in Co Kildare.

An emergency response was immediately initiated involving numerous agencies including the gardaí, rescue helicopter R116 and the aviation authority which played back radar tapes to determine the last known position of the aircraft.

Once that position was identified it led gardaí to discover the crash site.

Two inspectors of the Air Accident Investigation Unit are at present at the scene recording information from the aircraft and conducting a full investigation of the site, said Mr White.

It is hoped that the wreckage will be removed today and transported to Gormanstown, Co Meath for a detailed examination.

The aircraft, which was registered in the UK, was based in Kilrush, which is not an unusual situation according to Mr White. “It’s not unusual for UK or US registered aircraft to be flying around Ireland,” he said.

The aircraft was on a training flight when the incident occurred, he said. It was only when families of the two men and the owner of the aircraft became concerned that the alert was activated.

He said he will keep an open mind as to the cause of the accident through the entire “long and detailed” process which will be “meticulous”.