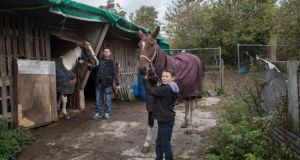 Efforts are needed to develop a more positive relationship between the Traveller community and local authorities to build awareness of the importance of horse ownership among Travellers, a new report has found.

Speaking at the launch of the ‘Traveller Horse Ownership’ research project, Pavee Point co-director Martin Collins said “99.9 per cent of Travellers take great pride and care of their horses”. And that despite a small number mistreating their animals, the majority of Traveller horse owners “want to be in full compliance with animal welfare legislation”. However, in order to enable this compliance, authorities must move away from the approach of impounding horses and charging fines, he said.

Mr Collins acknowledged that recent posts on social media had highlighted “horrific incidents of cruelty towards horses by a small number of Travellers” and condemned their activities as “criminal acts of cruelty” and “devoid of all humanity”.

He argued that greater openness was needed from local authorities to explore ways of facilitating Travellers to keep their horses under existing bye-laws while setting up equine, stabling and training projects.

The cultural significance of horse ownership to the Traveller community “cannot be overstated”, according to the report, which warned of “significant divisions” between traveller horse owners and those who enforce horse welfare legislation.

More than three quarters of respondents in a survey carried out for the report said the “threat of impounding” was a barrier to Travellers keeping horses. The authors also noted “significant levels of despair and anger” when people relayed stories of impounding and horses being put down.

Hughie Friel of the Donegal Travellers Project warned of the mental health “epidemic” among men in the Traveller community and argued that horse ownership, and “holding on to our culture”, played a vital role in promoting the wellbeing of young men.

“Horses have been a part of my life and soul. If we think back there’s no memory of Travellers without horses. They are more than just a horse; they’re part of the family.”

Mags Casey from the Tipperary Rural Travellers’ Project recalled watching the men in her life – father, brothers, uncles – care for their horses from dawn until dusk.

“It kept them alive. They weren’t committing suicide to the extent they are today, they weren’t taking the same amount of drink. Those men had pride in their animals.”

The report calls for local authorities to appoint designated liaison officers to work with local Traveller horse owners and for the establishment of a national Travellers’ horse owners association. Organised on-road racing should be explored and tracks should be developed so trotting and sulky racing can be carried out in a regulated, safe environment, it says.

It also calls for greater leadership from the Department of Agriculture, Food and the Marine in supporting initiatives which allow Travellers to engage and work with the equine industry. Commenting on the report, veterinarian Dr Pat Wall suggested that the Curragh racecourse employ young male Travellers to work with horses.

“That’s a whole area in Ireland where they have to import workers. Travellers have an expertise in horses, that’s an opportunity we’re not capitalising on.”