Heroin and cocaine worth €240,000 seized in separate Dublin operation 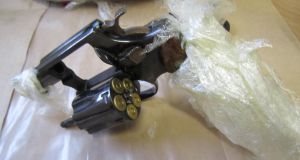 One of the two loaded handguns that were recovered. Photograph: An Garda Síochána/Twitter

Firearms have been seized and three men arrested as part of an investigation into organised crime in Dublin.

Gardaí on Thursday said they had recovered two loaded handguns which were wrapped in cling-film.

It was part of an operation against criminal gangs in west Dublin. Shortly after 6pm officers carried out raids on an unspecified number of addresses in the Shancastle Park area of Clondalkin.

The operation was carried out by local units from Ronanstown and Lucan and supported by the Emergency Response Unit and the Armed Support Unit.

The weapon were recovered from the back of one of the houses searched and were subsequently made safe before being taken away for ballistics examination.

Three men aged in their 20s were arrested and detained under Section 30 of the Offences against the State Act, at stations in west Dublin.

Meanwhile, in a separate operation, heroin and cocaine worth almost a quarter of a million euro have been seized in Dublin.

Gardaí said Thursday’s operation in the suburb of Ballymun led to the arrest of 20-year-old man.

“As a result of an intelligence led operation targeting organised crime groups involved in the sale and supply of illegal drugs, Gardaí from Ballymun searched a house in the Cromcasle area of Kilmore, ” they said in a statement.

The search uncovered more than a kilogram of heroin and some cocaine worth about €240,000. A further €7,500 was found in cash.

The suspect was being held on Thursday under Section 4 of the Criminal Justice Act.