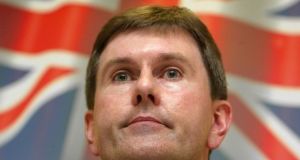 DUP MP Jeffrey Donaldson has repeated his call for the Irish Government to agree a specific timeline for the backstop. Photograph: Reuters/Paul McErlane

DUP MP Jeffrey Donaldson has repeated his call for the Irish Government to agree a specific timeline for the backstop, the insurance mechanism to avoid a hard border on the island of Ireland.

The “impasse” in Westminster, where a vote on the backstop was defeated three times, was caused by Ireland, according to Mr Donaldson.

Any refusal to address the backstop means that the UK is heading towards a no-deal Brexit, he warned.

Mr Donaldson told RTÉ radio’s Morning Ireland that the agreement signed between British prime minister Theresa May and the EU on the backstop was not legal because she did not have the authority to sign a deal without the approval of parliament.

“Dublin knows that the problem is,” he said.

He said he is asking for a time frame on the back stop so people will know that it is temporary and not indefinite.

“The Irish Government is refusing to budge on the time scale. That’s the only problem. (British) parliament could agree if that was removed,” he said.

Mr Donaldson said that from the start he had not wanted a hard border and the UK government had recognised there needed to be an agreement on both sides to avoid that scenario.

Mr Donaldson said he was disappointed that the Taoiseach was heading for a no-deal situation because of the backstop.

He said: “Fifty per cent of Ireland’s beef goes to the UK. Is it in the interest of Irish farmers that there is no deal?”

When asked about the Tory leadership race, Mr Donaldson said the DUP had talks with the contenders to express their concern about the backstop. The DUP’s agreement is with the Conservative Party “and by extension with the prime minister, we will work with whoever that is.”

He said: “I do hope we can resolve this issue to avoid a no-deal Brexit and a hard border. I hope the Irish Government will work with us to enable us to move to the next stage.”