Warmer weekend ahead but showery conditions to persist 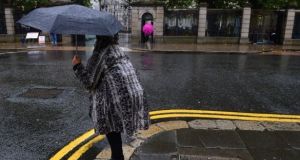 The long term forecast is for the changeable showery conditions to continue into the middle of next week. Photograph: Frank Miller/The Irish Times

A slight improvement in the weather is in the offing for the weekend with temperatures set to increase – but the changeable, showery conditions are predicted to persist.

A stiff northerly breeze made for a frigid couple of days especially in the east with temperatures in Dublin on Thursday reaching a high of only 12.8 degrees. Temperatures will not be much better on Friday reaching only 15 degrees across the country and it will be more of the same on Saturday with rain in parts of north Leinster on Saturday morning.

The long term forecast is for the changeable showery conditions to continue into the middle of next week.

It will get progressively warmer though with temperatures reaching 17 degrees on Sunday, but there will be a lot of heavy rain in places.

Temperatures will be between 15 and 18 degrees on Monday, but, again, with further showers.

The good news is that Tuesday and Wednesday looks to be milder and less showery with highs of 20 degrees and it will stay like that for the rest of next week.

There will be a busy weekend of summer festivals with perhaps the highlight being the celebrations to mark the centenary of the first transatlantic air crossing.

History was made on June 15th, 1919 when John Alcock and Arthur Whitten-Brown landed in a bog outside Clifden in Co Galway having left Newfoundland 16 hours previously.

There will be a wreathlaying ceremony at the Derrigimlagh Marconi Station at between 8.20am and 9am on Saturday morning marking the exact time 100 years ago when Alcock and Brown made landfall off the Irish coast.

The ceremony will be followed by a celebration breakfast at the Marconi Restaurant which will be attended by relatives of the two men.

The seventh annual Doolin Folk Festival is expected to attract thousands of visitors to the Co Clare village on Saturday. In Dublin Joyceans will be out on Sunday to mark Bloomsday and the annual celebration of James Joyce’s great masterpiece Ulysses.

The big GAA games of the weekend will be matches in the Leinster hurling championship between Wexford and Kilkenny on Saturday in Innovate Wexford Park followed by Dublin v Galway in Parnell Park.

On Sunday Salthill will host the Connacht Football Final at which the Leitrim team which won the Connacht championship in 1994 will be presented to the crowd to mark 25 years since their historic breakthrough.

In the Munster senior hurling championship Tipperary will play Limerick at 2pm in Semple Stadium, Thurles and Clare will play Cork in Cusack Park, Ennis.