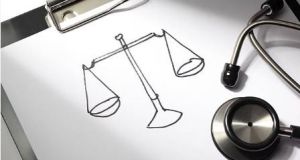 The State is facing a liability of almost €2.8 billion to fund future personal injury and property claims against the Health Service Executive.

The figure, which grew almost 20 per cent last year, relates to active legal claims being handled by the State Claims Agency (SCA), which have yet to be concluded.

Most of the €2.792 billion in liabilities on the agency’s books is accounted for by claims in respect of clinical care in the health service (€2.332 billion), with the rest relating to non-clinical care claims, according to the HSE’s annual report for 2018.

The cost of claims against the HSE and settled last year by the agency jumped 13 per cent to €318.7 million, from €283.2 million in 2017. Such was the growth in claim settlements the SCA had to be provided with an additional €46 million as part of a supplementary budget last year.

The annual claim cost figure is expected to increase significantly in future years, based on actuarial estimates, the report says, though no provision has been made for this liability in the financial statements.

Catastrophic birth injuries account for the single most costly category of claims against the health service. Separately, controversy last year over the CervicalCheck screening programme has been followed by a big increase in litigation involving this and other screening programmes.

Despite growing concern at the cost of litigation, two-thirds of claims received by the SCA had not been reported previously within the health service, according to the report.

The accounts separately record an outstanding estimated liability of about €198 million arising from a deal reached between the State and medical consultants on historical pay issues. Forty per cent of the pay retrospectively due to consultants is being paid this year and the balance in 2020.

HSE received 6,268 compliments while 6,610 complaints were recorded last year, the report states. The number of complaints is down on the 8,281 recorded in 2017 but this may relate to a change in the way they are handled; only complaints made formally to complaints officers, rather than to frontline staff, are recorded.

The main areas of patient complaint were “access”, “safe and effective care” and “communication and information”. Just over half of all complaints were dealt with in the requisite 30 days.

A further 11,367 complaints were recorded and examined by staff in voluntary hospitals.

The office of the confidential recipient, a service that deals with allegations of abuse or mistreatment in HSE or HSE-funded residential care facilities, dealt with 206 complaints last year, a slight increase on 2017.

The HSE also received 48 protected disclosures from staff during the year.

John Connaghan, who was appointed interim director general after Mr O’Brien left, was paid €112,468 for his work in this capacity during the year. Mr Connaghan resigned from this position on December 31st, 2018.

*This article was amended on June 13th