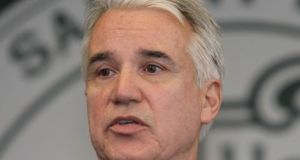 George Gascón, the district attorney, has acknowledged that a disproportionate number of African Americans are prosecuted in the city, which led him to ask a troubling question: To what extent does bias affect the work of prosecutors? Photograph: Shawn Calhoun

While riding the train in San Francisco three years ago, a white man told an African-American man that he smelled bad and should move away from him. An argument followed, and the African-American man, Michael Smith, was eventually tackled by police officers and accused of assaulting them.

The San Francisco district attorney’s office charged Mr Smith with seven counts, including battery on a police officer and resisting arrest. But after viewing body camera footage, a jury acquitted Smith (23) on most of the charges, and the prosecutors dropped the other counts. Mr Smith’s lawyer said he does not believe a white person would have been arrested or prosecuted.

While the district attorney’s office disagreed with that assessment of the case, George Gascón, the district attorney, has acknowledged that a disproportionate number of African Americans are prosecuted in the city, which led him to ask a troubling question: To what extent does bias affect the work of prosecutors?

As a result, the office has begun experimenting with an approach it describes as “blind charging,” which prevents prosecutors in one of the nation’s busiest district attorney’s offices from seeing demographic information before making an initial decision on whether to charge someone.

Criminal justice experts said San Francisco appeared to be the first such office in the nation to test that approach. “The question we want to ask ourselves is, ‘Would you charge based just on the behaviour, without the race and other demographic information?’” Gascón said. “We wanted to see what might be causing a disparate application of the law.” In recent weeks, the office has begun by removing details – like race and names – from police reports before turning those cases over to prosecutors to decide whether to press charges. Starting in July, the office intends to employ computer software designed by Stanford University researchers to redact a suspect’s race and name, and that of victims. Also removed will be locations where crimes were said to have been committed.

The only information prosecutors will initially have access to is an officer’s incident report, which generally includes the reason someone was stopped before an arrest, evidence that a crime was committed, witness statements and anything a suspect might say.

Only after assistant district attorneys make a preliminary decision about charges would they be permitted to access other information, including race and other demographic details, body camera footage and photos. In each case, regardless of the initial charging determination, all of the evidence will ultimately be reviewed, prosecutors said. If a prosecutor comes to a different conclusion between the first and second steps, that will be recorded and compared to historical data. Prosecutors will also be required to explain what changed their minds, and those patterns will be studied, the office said.

The experiment in blind charging comes as prosecutors’ offices across the nation have been instituting policy changes to grapple with what has been found to be extensive racial bias in the criminal justice system, which has led to disproportionate levels of incarceration among African Americans.

District attorneys in Brooklyn, Dallas County and elsewhere no longer prosecute low-level marijuana cases. Prosecutors in Philadelphia now handle shoplifting as a minor offense rather than a serious crime if the amount stolen is less than $500. And other district attorneys around the nation have stopped demanding bail for people facing misdemeanour charges.

Legal analysts said the San Francisco policy appears to go a step further by directly confronting ingrained racial bias that leads some prosecutors, for example, to file charges against African Americans for low-level drug offenses more frequently than against whites, even though studies show that white people use illicit drugs at higher rates.

“It strikes me as an interesting and intriguing thing to do because I don’t get a sense that there’s a lot of systemic change being attempted in this way,” said John Pfaff, a Fordham University law professor and author of “Locked In: The True Causes of Mass Incarceration and How to Achieve Real Reform.”

Mr Pfaff said the potential for bias might be greater among prosecutors than police officers because prosecutors are more likely to be white than police officers, and are generally from higher than average socio-economic backgrounds. So far, blind charging has not been opposed by prosecutors’ organisations, police unions or crime victims’ rights groups. Although there have been few detailed academic studies about bias among prosecutors, a 2017 report by Carlos Berdejo at the University of Loyola Law School found that white defendants in Wisconsin were 25 per cent more likely than their black counterparts to have criminal charges dropped or reduced to less serious crimes.

In the 2016 case which led to the arrest and prosecution of Mr Smith, the train passenger who told Mr Smith that he smelled bad called 911 after Mr Smith responded angrily, said Glenn Katon, Mr Smith’s lawyer. The man told the emergency operator that Smith had tried to rob him and might be armed, although Smith did not have a gun, according to court records. Once the transit police arrived, a mobile phone video appeared to show Smith, who was with his pregnant girlfriend, being punched in the head by a police officer while he was handcuffed. The police say Mr Smith spit at them. After Mr Smith was acquitted on most counts and the others were dropped, he sued the transit system and the officers and won a $40,000 settlement, Mr Katon said. Mr Gascón’s office declined to comment on the case, but Max Szabo, a spokesman, said that “removing implicit bias and the implications of race” would help “enhance fairness in a system long plagued by inequities.” –New York Times