Dublin evictions: ‘These new owners, they don’t see us as people’

Residents in two Dublin apartment blocks face eviction as their landlord looks to do improvement works on the property, leaving many of the families facing homelessness. 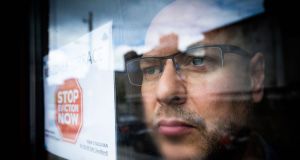 ‘We are clear here: we are not moving’: Ramon Cernuda of Rosedale Terrace, off Clanbrassil Street. Photograph: Tom Honan

Low and middle-income tenants in two Dublin apartment blocks say they will “resist together” moves to evict them by their new landlord.

Through contractors Belgrave Property Management, it issued termination-of-tenancy notices to the tenants, who include a number of single people in bad health and children with special needs and their families.

At the South Richmond Street site, about 30 households occupy a row of five Georgian houses, currently in bedsits in bad condition. Most have lived here for four to 10 years, paying about €600 a month.

It’s beyond shocking. It is getting to the point where families on normal incomes cannot afford to live in the city

Rosedale Court is a 14-unit apartment block on Rosedale Terrace and home to 13 households, including 19 children. Tenants pay €950-€1,300 a month for one- and two-bed apartments.

Both Val Issuer and Maples have an address at Molesworth Street in Dublin. When visited by The Irish Times this week, no one at the address could provide contact details for Val Issuer and no one from Maples was available. Neither has responded to emails or phone calls.

South Richmond Street tenants were issued with notices on October 2nd, 2018, to quit their homes by May 15th, 2019.

“The reason for the termination of the tenancy is that the landlord intends to substantially refurbish and renovate the dwelling and the apartment block containing the dwelling in a way which requires the dwelling to be vacated,” it says.

Some tenants have left but about 30 households remain – some with the consent of the landlord until November. Others are “overholding” but expect to be evicted.

Arturas Zapivalovas, his wife, Anastasia Nizovtseva, and their nine-year-old daughter who has special needs have lived here for eight years. They can stay until November.

Johanna Byrne, from Foxrock, who is on disability allowance, has lived here for four years, paying €650 a month for a bedsit. She complains the building has not been maintained in recent months, with problems including leaks, mould and rats.

Lucien Rinca, a chef, has lived here with his wife and their dog for seven years, paying €600 a month. He agrees the building is rundown. “I’m not complaining about that. Now is the problem. We have to move but the rent is impossible. I saw one apartment – €1,750. I really don’t know what to do. I am so confused.”

In Rosedale Court, Ramon Cernuda got notice on April 2nd to quit the property by November 17th. The reason given was “the landlord intends to substantially refurbish and renovate”.

The Residential Tenancies Board this week ruled the notices invalid for several reasons, including that Val Issuer had presented insufficient evidence that vacant possession was needed for the refurbishments.

“It is a small victory,” says Mr Cernuda. “We are clear here: we are not moving. We have nowhere to go and we want the notices to quit withdrawn. We are with the tenants on Richmond Street and we will resist these evictions together. ”

Both sets of tenants are being supported by the Dublin Renters’ Union (DRU), which is campaigning for legislation to prohibit “evictions for profit”.

Peter Dooley of DRU has been holding meetings with tenants in Dublin 6 and 8 – desirable residential areas with a significant proportion of the capital’s bedsits, making them attractive to funds seeking to “sweat” residential assets.

He describes legislation that came into force on June 4th tightening up the rules around when a landlord can seek vacant possession for renovations as “window dressing”.

“It will do nothing to stop these kind of situations where a company can come in, throw men, women and children out on the street, for pure profit. We need real legislative change to protect people’s homes. The DRU is supporting tenants to organise to resist this.

“It’s beyond shocking. It is getting to the point where families on normal incomes cannot afford to live in the city.”

John Mark McCafferty, chief executive of Threshold, said legislation would not prevent these types of evictions, which underlined the need for the significant roll-out of purpose-built, affordable housing.

Belgrave Property Management did not respond to phone or email contacts.