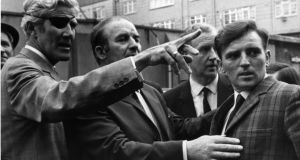 Gerry Jones, Neil Blaney and John Kelly (right) during the Arms Trial in Dublin in 1970

A group representing victims and survivors of the Troubles has called on the Irish government to carry out an independent inquiry into the 1970 Arms Crisis on the 50th anniversary of the opening of the resultant trial.

The director of services with the South East Fermanagh Foundation (SEFF), Kenny Donaldson, said there need to be a “fresh and independent review” into the events surrounding the crisis.

Unionist politicians also called on the Republic to give a full account of its role during the Troubles.

The Ulster Unionist MLA Doug Beattie said this “has never received the scrutiny it merits” and it “has come to be regarded as the equivalent of a passive bystander.”

This was “far from the case,” he said, adding that “if there is ever to be a serious examination of the Troubles and the legacy they have left, then there needs to be an honest assessment and acknowledgement of the role played by the Republic.”

The State, he said, “played a central role in the Troubles and this needs to be both highlighted and acknowledged if we are to have a full understanding of what really happened during those dark times.”

Future taoiseach Charles Haughey and senior government minister Niall Blaney – who had both been sacked from the cabinet over allegations of involvement in the illegal importation of arms to defend nationalist communities in the North – and three others went on trial in Dublin on May 28th, 1970.

They were accused of conspiring to import weapons to arm the Provisional IRA. The charges against Mr Blaney were dropped; the first trial collapsed and Mr Haughey and the others were acquitted in a second trial.

Mr Donaldson said the trial had been a “whitewash” and there were outstanding questions over the State’s role.

“Weaponry procured via the arms shipments, whilst destined northwards, is also believed to have fallen into the hands of individuals operating in tandem with subversives, leading to murders such as Garda Richard Fallon, ” he said.

Garda Fallon was shot dead in April 1970 by bank robbers – believed to be members of republican splinter group Saor Éire – who were trying to escape after raiding a bank on Arran Quay in Dublin. He was the first member of An Garda Síochána to die as a result of the Troubles.

“Fifty years on the government of 2020 in the Republic of Ireland needs to finally step up to the plate on these issues,” Mr Donaldson said.

The DUP MP Gregory Campbell said the events of the arms crisis had been “just one part of the support at many levels for the Provisional IRA from the Republic, without which, it would have been impossible for that group to wage its campaign of terror and murder.

“It’s time for Dublin to accept the role it played in fomenting and sustaining Provisional IRA terrorism and take steps to help bring closure to those affected,” he said.

The Traditional Unionist Voice leader, Jim Allister, said the State had acted as a “safe haven for republican terrorists” and this was a “shameful history which has been overlooked and ignored for much too long.

“Unless it is faced up to and Dublin is forced to open its files we will never know the truth of the role successive Irish governments played in supporting and facilitating the republican terror campaign,” he said.