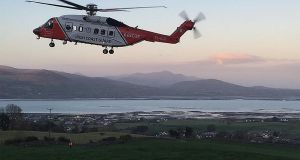 A five-year-old girl has been airlifted to hospital in Co Kerry after floating a mile offshore on an inflatable lilo.

The alarm was raised on Thursday afternoon after the child was pulled out to sea off Littor beach on the southern shore of the Shannon estuary in north Co Kerry.

A spokesman for Valentia Coast Guard said the Shannon Rescue 115 helicopter was called to the scene at 2.50pm on Thursday. The Kilrush RNLI lifeboat also attended the scene.

The five-year-old, who had floated a mile offshore, was airlifted to University Hospital Kerry in Tralee. The girl’s condition is unknown.

Meanwhile, a six-year-old boy was rescued off White Strand beach in Renvyle, Co Galway, after his surfboard was washed out to sea.

Emergency services were called to the scene shortly after 4pm on Thursday after a member of the public called 999.

The boy was recovered from the water by a local boat and assessed by paramedics who had landed in a helicopter near the beach. The child did not require further medical assistance.

Coronavirus: One death, 25 new cases reported in State 18:25
Children who go abroad must self-isolate for 14 days before return to school in September 18:10
Angry Taoiseach calls for resumption of work on new National Children’s Hospital 17:56
Man tried to steal cars while high on crack and holding chihuahua 17:51
Judge gives landlord a week to halt Covid-19 parties near UCC 17:32