Virus ‘astonishingly stable’ due to ‘responsible behaviour’ of the public

Chief Medical Officer Dr Tony Holohan says that a loss of smell and/or taste has been reported as a "clear feature" of Covid-19 and can present without any other symptoms. Video: RTÉ 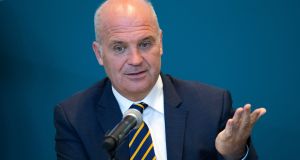 An additional nine people have died from coronavirus in the Republic, it was confirmed by the Department of Health on Thursday evening.

This brings to 1,639 the total number of deaths in the State from Covid-19.

A further 46 cases of the virus have also been reported, bringing to 24,841 the total number of cases in the Republic of Ireland.

At the department’s evening Covid-19 briefing, the chief medical officer Dr Tony Holohan urged the public to continue adhering to public health guidelines ahead of the bank holiday weekend.

Prof Philip Nolan, chair of the National Public Health Emergency Team (NPHET) Irish Epidemiological Modelling Advisory Group, said according to the most recent indicators the “overall story” is that the disease is stable and declining.

He said the situation was “astonishingly stable” as he credited the “responsible behaviour” of the public.

The number of people in intensive care units remained at or around 50 with admissions to ICU remaining at around one or two a day, bar on Wednesday when there were five such admissions.

The number of new admissions to hospital with Covid-19 in the past 24 hours was five.

He said it could be difficult to estimate the reproductive number when the numbers of cases are very low. He said the reproduction number is currently estimated to be 0.5.

Information around what impact the first easing of restrictions might have on the numbers will not be available for another week.

“It is our hope that the r-number will remain below one and our progress is preserved,” Prof Nolan said.

There have now been 468 clusters of infection notified in residential care settings, an increase of seven in 24 hours, but the number in nursing homes remains unchanged at 256, Dr Holohan said.

In terms of cases associated with those clusters, there have been 6,568 cases notified as occurring among those in residential care settings, an increase of 76, and 5,069 of these cases were reported among nursing home residents.

Dr Holohan said he did not anticipate changes being made to the various phases already set out for easing of restrictions. “We wouldn’t rule it out but at the moment we are not anticipating any specific major change in terms of things that are planned for a given phase being changed in terms of the phase for which they are identified,” he said.

Meanwhile Dr Kathleen MacLellan, chair of NPHET’s vulnerable people subgroup, said it was “very difficult to see” how nursing homes could have been left isolated by the State as the Covid-19 pandemic began.

It was claimed at the Dáil’s Covid-19 committee earlier this week by Tadhg Daly, the head of of Nursing Homes Ireland, that key State organisations left nursing homes and their residents “isolated” during the pandemic’s early stages.

She insisted there had been “significant” engagement with the sector.

“Every time an issue has come up we have worked with Nursing Homes Ireland to try and resolve that and it is very clear that we have seen the HSE response here,” she said.

She said guidance was issued “very early” on hospital discharges and infection control.

The Dáil committee also heard there was no mention of nursing homes in NPHET’s first 11 meetings. However, Dr MacLellan said “it would be unfair to say that nursing homes have not been part of the considerations of NPHET”.

Dr Holohan said long-term residential facilities were “very much part of the discussion”. A group will be established “for the very purpose of trying to identify what learnings we can take to strengthen the response in respect of this whole sector”.

Dr Holohan also said a mortality paper was prepared and discussed by NPHET at its meeting on Thursday and “identifies that mortality in Ireland has been within the lower range in overall terms compared with other health systems across Europe.

“Ireland will continue to report both confirmed and probable deaths from Covid-19 in all settings and direct public health measures to limit the burden of mortality.”

Dr Ronan Glynn, deputy chief medical officer, said NPHET also agreed in principle at its meeting to include in the case definition for Covid-19 the sudden loss of smell (anosmia) and loss of taste (ageusia).

“This is subject to updated guidance from the ECDC, which is expected to be published tomorrow.”

Figures released at the briefing show that of the 24,795 cases of coronavirus notified up to midnight on Tuesday, some 57 per cent of them were female and 43 per cent male.

The median age of confirmed cases was 48 years.

A total of 3,267 cases (13 per cent) were hospitalised and of those hospitalised, 404 cases have been admitted to ICU.

Some 7,920 of the cases are associated with healthcare workers.