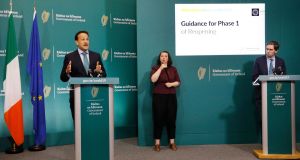 The pressure to accelerate the reopening of Ireland is growing; it is audible on the airwaves, and on the streets, where the hum of traffic grows slowly but steadily louder.

It is heard in the highest councils of the land; yesterday Dr Tony Holohan, the chief medical adviser to the Government and architect of Ireland’s strict lockdown, heard submissions from Cabinet ministers in a private meeting which suggested he might change his recommendation that social distancing be defined as keeping two metres between persons, rather than one metre, as some favour. He declined.

It is heard in the Dáil, where opposition leaders, including Micheál Martin and Alan Kelly, called for aspects of the lockdown to be eased.

On Wednesday Minister for Rural Affairs Michael Ring told his local radio station he was in favour of reducing the two-metre rule. On Thursday morning, the Fianna Fáil frontbencher Jim O’Callaghan said (on RTÉ Radio One’s Morning Ireland) that the Government had to take into account other factors as well as Dr Honohan’s public health advice. The other factors include the costs of continuing the strict lockdown on children, the elderly, mental health, domestic violence and the economy. “No matter what we do, there will be risks,” he said.

It is a view that is becoming prevalent in and around Government.

It is also a mark of success. In the early phase of the fight against the virus, when the country looked in horror at what was happening in Northern Italy and feared the same would happen here, Minister for Health Simon Harris said repeatedly that politicians would not make the decisions about how Ireland responded – public health experts would. He was widely praised for his approach and that approach, notwithstanding the difficulties in nursing homes, has been successful.

But now as people increasingly chafe under the lockdown and impatiently regard the proposed slow and cautious relaxation of the restrictions, as the economy calcifies and the public finances crater, the decision-making matrix is shifting. When the country feared a Bergamo-style fate, public health considerations were the only consideration. That having been avoided, minimising damage to society now requires the inclusion of other considerations, insiders say.

That is the job of the Cabinet, which is still, after all, the ultimate decision making forum for the country.

They may want Tony Holohan to give them some cover – which he seems, so far, disinclined to do on the two metres anyway – but it is properly the job of ministers acting collectively to weigh up the considerations and consequences and decide whether to ease the lockdown or not. There is a growing sense around government that if the impressive suppression of the virus continues, that accelerating the lockdown is on the way.

In another week, the momentum may be irresistible. Either way, it is the Government’s job to decide.