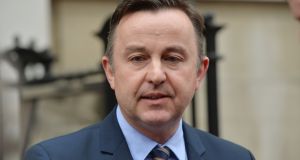 A June 30th deadline for applications for Covid-19 mortgage and loan repayment breaks will not be extended, Banking and Payments Federation Ireland chief executive Brian Hayes has said.

He told RTÉ’s News at One that those who miss the deadline to have their application processed would “fall into another category”.

Mr Hayes said it was important that people realise the framework put in place by financial institutions in Ireland came from the European Banking Authority (EBA) and “must be done and dusted effectively” by the deadline it has set.

“We have to follow their guidance,” he said, adding that there would be significant engagement between banks and customers seeking help.

“It started last week by asking people, number one, can they go back and pay their mortgage, if not, do they need another three month extension, could they pay interest only or part capital, part interest?

“At the end of that six month period the same question will arise to people. Can they begin to pay their mortgage again?”

The federation this week said 78,000 mortgage payment breaks had been granted by Irish lenders as a result of the crisis, a 20 per cent increase in less than a month. A total of 140,000 mortgage, personal and business loans are now subject to temporary payment pauses of three months.

When asked if it was possible the Covid-19 suspension would be extended, Mr Hayes said no and that this was “the clear view coming from the European regulator”.

He said if people got to the end of the six month period and were still unable to afford the cost of their repayments, the banks would engage with them.

“Banks deal with this every day, we’ve put in place in the last decade over 100,000 mortgage restructures for people,” he said.

The former Fine Gael TD and MEP said that as the lockdown ends and people go back to work confidence will be restored and people will be able to pay their mortgages again.

“If not they will have to put alternative arrangements in place - that is the normal regulated way to deal with people who fall into difficulty.”