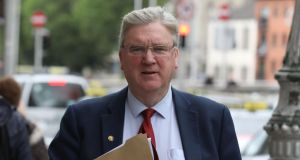 Pat McDonagh, owner and founder of Supermac’s, made the comments on RTÉ radio on Thursday. Photograph: Collins

Chief executive of fast food chain Supermac’s, Pat McDonagh, has been sharply criticised in the Dáil over his claim the Covid-19 pandemic unemployment payment was like “winning the lotto” for some part-time employees.

Mr McDonagh called for the scheme to be changed to reward full-time workers who needed to stay at home, while encouraging part-time workers who had no incentive to return to work to take up more shifts.

But Labour TD Ged Nash described Mr McDonagh’s comments as an “utter disgrace” and part of a “horrible narrative” that people who received the €350 payment, more than they previously earned, “are somehow cheats, scroungers and spongers”.

Rise TD Paul Murphy said the comments were “utterly disgusting” and claimed “the State makes up for the low pay of employers like Pat McDonagh” who he said was worth over €300 million, and “that’s what, or at least a part of what, his multi-millions are built on”.

Mr McDonagh told RTÉ radio’s Today with Sarah McInerney of the case of a mother and son on his staff who had both qualified for the pandemic payment – even though the mother was working full time, had two children to support and elderly parents to take care of, while her son worked eight hours a week and earned between €80-€100 but got the same €350 pandemic payment.

The student had “won the lotto,” he said.

The mother should be receiving more money to stay at home, he said, while the son’s payment should be reduced and he could be given more shifts.

Mr Nash, who also appeared on the show, told the Dáil Mr McDonagh’s remarks were “revelatory of how some employers treat their staff. Remember, and he said this on radio today, this is a guy who takes €1.60 each day from his staff to allow them to eat the chips they produce.”

Asked if paying employees a “living wage” might be an incentive, the Supermac’s chief said employees started on minimum wage but as they worked their way up the ladder they were paid more and 70 per cent of staff were full-time.

He added: “What it revealed was this is about getting people back to work for poverty wages. That’s why it’s being driven.”

1 Coronavirus: Unwinding of latest stage of roadmap ‘could be pushed back further’
2 The downing of a minister: How Barry Cowen went from hero to zero in just twelve days
3 Coronavirus in Ireland: Further reopening delayed amid 'worrying' rise in infection rates
4 Covid-19: Ten-person limit put on house gatherings as pubs to stay shut until August 10th
5 Like ‘a grandfather at the sherry cabinet’: Trump’s meandering monologue
Real news has value SUBSCRIBE