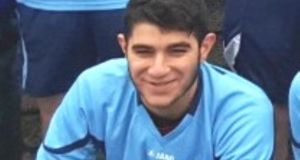 Hasib Allakarami was studying sport at IT Sligo, was engaged and was due to get married this summer. Photograph: Carrick Town FC/Facebook

Many tributes have been paid to the young man who died in a collision on the N4 in Co Sligo who was a member of the Kurdish community from Carrick-on-Shannon, Co Leitrim.

Hasib Allakarami who was just 21, died after the car he was driving was involved in a collision with a truck near Castlebaldwin on Thursday.

The popular young man who was studying sport at IT Sligo, was engaged and was due to get married this summer. He had played underage soccer with Carrick Town FC and underage football with St Mary’s GAA Club in Carrick. Both clubs paid tribute to him yesterday.

“He was one of our own”, said Frankie Smith manager of underage teams with Carrick Town. “He was very popular and friendly and always had a smile on his face”.

In 2013, Hasib got the attention of Giovanni Trapattoni when local school children put on a display for the then Republic of Ireland manager who was visiting Letirim for the Carrick 400 celebrations.

Sr Nora Burke who works with the Kurdish community in Carrick said they were heartbroken at the news. “They are a very gracious , very welcoming community and our hearts go out to them and also to their relatives still living in Kurdistan and Iraq who will be heartbroken at this news,” she said.

A funeral service took place in Sligo on Friday, with burial afterwards in Sligo cemetery.

Three days of mourning are taking place at the family residence in Lis Cara, Carrick-on-Shannon. In a Facebook tribute, Carrick Town FC said it was devastated to learn of the news.

“He was an outgoing and friendly young lad and will be missed by everyone at the club and beyond”, according to the tribute.

St Mary’s GAA club also expressed sadness and said the young man had been a loyal member since 2008 .

“ He was always in good form and his witty comments always added to the fun of the day”, according to the club’s Facebook tribute.

“Whilst we have lost a good friend, we are mindful that his family have lost a son and brother and the wider Kurdish community are also mourning his passing”.