‘Magic of Citizens’ Assembly’ to address gender equality this weekend 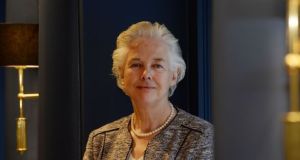 Citizens’ Assembly chairwoman Catherine Day said the session on Saturday was to get people to ‘think how much gender stereotyping is inside all of us whether we know it or not’. File photograph: Catherine Day

Citizens’ Assembly chairwoman Catherine Day has suggested that the public may be more liberal on the issue of gender equality than might be expected.

The assembly on gender equality meets in session for the first time on Saturday with presentations on how gender stereotypes are formed at a young age.

There will be a section when workers will speak about working in professions which are normally reserved for those of the opposite gender. Among the speakers will be well-known quantity surveyor Lisa O’Brien who features regularly on Dermot Bannon’s Room to Improve.

They will also hear from Elaine O’Mahoney of the Central Statistics Office about gender in Ireland.

Ms Day said the “magic of the Citizens’ Assembly”, as discerned from previous gatherings, was that “when you give people time and space and then opposing opinions, out of that comes very sensible ideas, but also you get a good flavour of what people want”.

“We will be focusing on issues around gender norms and stereotypes and the way the Constitution deals with the family,” she said.

“Ireland didn’t invent the process, but we have had spectacular success from it, more so than anywhere else.”

The assembly is made up of the chairwoman and 99 citizens, randomly selected to be broadly representative of the Irish electorate.

It will meet on Saturday 15th and Sunday 16th in the Grand Hotel Malahide and all public sessions will be broadcast live on the Assembly website citizensassembly.ie.

Ms Day said the session on Saturday was to get people to “think how much gender stereotyping is inside all of us whether we know it or not. Balance is what we are after all the time.”

On Sunday, Professor Linda Connolly of NUI Maynooth will speak about the evolution of the Irish family, Professor Siobhan Mullally will speak on the family in the Constitution and law.

The public have been asked to make submissions to the assembly. To date about 20 submission have been made well short of the 12,000 that were received when the assembly addressed the subject of abortion in 2017.

Ms Day said many organisations and individuals had been distracted by the election and she anticipated a lot of submissions by the March 6th deadline.