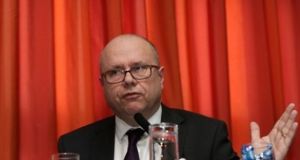 Fórse general secretary Kevin Callinan: ‘Section 39 workers were forced to organise and to threaten action to get a hearing. Modest progress was recorded. A process was agreed. Again the government failed to deliver last year.’ Photograph: Laura Hutton

Staff in nearly a dozen State-funded organisations providing health and social services are to go on strike on Friday of next week, February 21st, in a dispute over pay restoration.

The dispute centres on the restoration of pay which was cut following the economic crash for personnel in organisations providing health and social care services which receive State grant aid. The organisations are technically known as Section 39 bodies.

The unions contend that while Section 39 organisations were urged to cut staff pay in line with reductions in remuneration to public servants during the austerity years, the personnel involved have not seen pay restoration unlike direct State employees.

Trade unions on Friday pledged their full support to the campaign by Section 39 staff for pay restoration as well for demands by community employment scheme supervisors for access to a pension.

The community employment scheme supervisors also staged a one-day strike on Friday although further planned stoppages are expected to be deferred until after a new government is formed.

Unions representing both groups said that any incoming government had to realise that “unfinished business” in relation to pensions for community employment scheme supervisors and pay restoration for Section 39 staff had to be addressed.

Community employment scheme supervisors argued that the Labour Court in 2008 had recommended that a pension arrangement should be put in place for them.

Siptu deputy general secretary John King said the Government and government departments had told lies about the cost of providing pensions to community employment scheme supervisors, about the potential for knock-on claims and about current engagement on the issue.

He said this was “shameful”.

He said there had been a “charade” of engagement on the pension issue last year .

“We will not be fooled on that one again”, Mr King said.

Fórsa general secretary Kevin Callinan told the rally: “CE supervisions played by the State’s rules. They achieved a Labour Court outcome in 2008. They waited patiently for the worst of the crisis to pass. They believed that they had received a ministerial promise to address things. Again they were stabbed in the back. “

“Section 39 workers were forced to organise and to threaten action to get a hearing. Modest progress was recorded. A process was agreed. Again the government failed to deliver last year.”

The Department of Employment Affairs and Social Protection said its position was that community employment scheme supervisors and Section 39 workers were not public servants.

There are concerns in some parts of government that introducing a pension arrangement for community employment scheme supervisors could lead to knock- on claims by other groups in the State-aided voluntary sector, leading to significant costs.

It suggested that the provision of pensions across the wider community and voluntary sector could cost up to €347million per annum.