Two yellow weather warnings are in place until Saturday 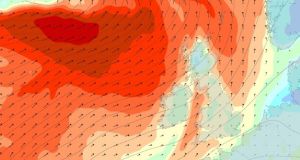 A wind map from midday on Friday showing the movement of Storm Dennis off the west coast of Ireland. Image: Magicseaweed

Met Éireann has warned of flooding over the weekend as Storm Dennis brings torrential rain and high winds across the country.

A yellow wind and rain warning has been put in place for Saturday, with most parts of the country expecting between 20 and 30mm of rain, while counties in the west and north of the country can expect it to be “much higher”.

Forecaster Matthew Martin said the risk of flooding was high because the ground is “completely saturated” due to the wet weather over the past week.

The last seven days have seen extremely wet weather as a result of Storm Ciara with some places getting four times the average amount of rain for the period.

“It is going to be a very unsettled weekend, and we will see deepening storm conditions over the next 24 hours,” Mr Martin said.

“Saturday will see a frontal move across the country, bringing strong winds, heavy rain and a risk of local flooding. It won’t require much rain to cause local floods due to the ground being completely saturated.”

The yellow weather warnings – which predict spells of heavy, locally thundery rain – are in place until 9pm on Saturday.

The yellow wind warning, in place until 8pm on Saturday, predicts “very squally” southerly winds with speeds of up to around 100 km/hr, with the strongest gusts on exposed coasts and hills

A weather advisory warning is also in place until midday on Monday, warning of flooding and “damaging, gusty winds”, leading to travel disruptions.

Across the country, Storm Dennis will bring a wet and windy day on Saturday with strong southerly winds and widespread heavy rain.

Temperatures during the day will reach 7 to 11 degrees and will fall overnight to between 1 and 3 degrees as the rain breaks up somewhat and skies clear. There will be widespread showers through the night.

The effects of Storm Dennis will continue to generate strong to near-gale force winds on Sunday.

Mr Martin said the national forecaster is still monitoring Sunday’s weather, but it is likely to be another very wet, and windy day.

It is likely the yellow warning will be extended for the entire weekend, and there is a possibility some coastal counties will be upgraded to an orange warning.

“Coastal fringes will bear the brunt of it,” Mr Martin added.

It will turn cooler with daytime temperatures of 6 to 9 degrees with showers turning wintry on higher ground in the west.

Forecasters in the United States say the storms are being caused by an unusually active jet stream.

The forecast centre warned that ships in the Atlantic could be in danger as waves reach as high as 30 metres.

Scattered showers will continue overnight on Sunday with some turning to sleet or possibly snow in the north and northwest. Temperatures will fall to 2 degrees.

Monday will still see windy weather that will bring showers to western coastal counties. It will be mainly dry with sunny spells further east. There will be highs of 7 to 9 degrees.

Showery and windy conditions will continue into next week.