Martin tells McDonald no party can be forced into government 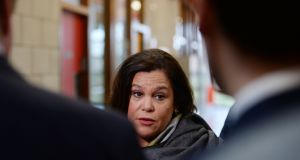 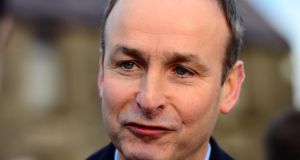 Michéal Martin argued no one grouping in the Dáil could force another grouping to form a government when there were such incompatible views on economic policy and other issues. Photograph: Eric Luke/The Irish Times

Fianna Fáil leader Micheál Martin has retrenched his position on not holding talks with Sinn Féin in a phone call with the party’s leader Mary Lou McDonald.

In a 15-minute phone call, Mr Martin congratulated Ms McDonald on her party’s election success and is understood to have outlined the reasons his party will not go into coalition with Sinn Féin.

He said his party had a mandate and it was its prerogative and duty to try to form a government.

Mr Martin argued no one grouping in the Dáil could force another grouping to form a government when there were such incompatible views on economic policy and other issues.

Ms McDonald said she told Mr Martin that people who voted for Sinn Féin and those who voted more widely for change are angry that Fianna Fáil is denying them the respect of sitting down with the party that represents them.

She said she would write to Mr Martin in the coming days to set out the substance of the party’s position and she has asked him to do the same.

Earlier on Friday, Ms McDonald warned smaller left-leaning parties against going into a government in which both Fine Gael and Fianna Fáil was involved.

Asked about the prospects of the Green Party and the Social Democrats entering coalition with Fianna Fáil and Fine Gael, Ms McDonald said: “I would say, Don’t do it. Don’t give way. This is a moment. We have had a really really transformative election.”

Neither the Greens nor the Social Democrats have stated any public view as yet on formation talks.

A source in the Social Democrats said talks had not yet gone past exploratory stage and it was too early.

Meanwhile, a source in the Green Party said the party would take its own initiative early next week and outline in considerable detail its policy priorities and what amounted to its red lines.

She was also critical of what she described as the “old boys’ club” of Fine Gael and Fianna Fáil. She said that by refusing to consider government formation talks with Sinn Féin, those parties “believe they are entitled to hold power” between themselves.

Sinn Féin’s housing spokesman Eoin Ó Broin conceded on Friday morning that a left-leaning coalition led by his party and comprised of left-wing parties and individuals was not possible, as there would not be not sufficient numbers in the new Dáil.

‘Thrown in the towel’

The comments were criticised by People Before Profit. Dún Laoghaire TD Richard Boyd-Barrett who said Sinn Féin had “thrown in the towel” too early and turned its back on the prospect of a leftist coalition.

But Solidarity’s remaining TD Mick Barry said the numbers were not there for a left-wing coalition and called for a mass social movement that could lead to such a government after the next election.

Meanwhile, Taoiseach Leo Varadkar said the election was a “bad day for Fine Gael” and there was “no dressing it up”.

“We lost seats and votes. Less than we feared a week ago, perhaps. But more than we hoped when we saw the exit poll on Saturday night,” Mr Varadkar’s email to party members on Thursday night said.

“When the situation becomes clearer, I will convene a special meeting of all our elected representatives as well as members of the Executive Council and and key constituency officers, as an opportunity to regroup and chart the future.”