‘The social worker said: Were two seconds of pleasure worth it for all this?’ 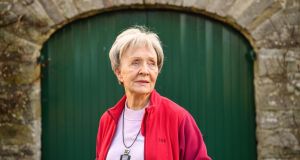 Stephanie Walsh was asked in 1971 if her family would offer a temporary home to a young pregnant girl. Photograph: Diarmuid Greene

Last week Stephanie Walsh wrote in The Irish Times about how she was asked in 1971 if her family would offer a temporary home to a young pregnant girl, as an alternative to the girl going to a mother and baby home.

“I had just given birth to our third child when the 17-year-old pregnant schoolgirl came to live with us, acting as an au pair. The girl and her parents wished for her pregnancy to be kept secret. This was the climate of the early 1970s.

“This girl was part of our family until her baby was born,” she wrote. Later the young mother, following discussions with Walsh, her own parents and a social worker, decided to have the baby adopted.

“At that time it seemed the best option for the baby and the mother. In the Ireland of the time, single pregnant girls had few choices.”

Following an inspection by a social worker, “it went from there”, she says. No money was exchanged. The girls stayed for up to six months, had their own room and helped out around the house and with babysitting.

“They were very much part of the house. They ate with us, watched television with us, were part of the family. I smoked at the time, so we smoked together, and went on days out on Sundays, and on weekends away.”

The O’Malleys never asked the women their stories, but the women shared over time. One, who had recently lost her father, did not want to hurt her bereaved mother by telling her she was pregnant. One told her family that she had got a job elsewhere.

“The youngest was still at school. Another had a boyfriend who visited. “We knew these girls were going through hell,” she says. Once a girl ran away. When she came back, the social worker came to see her.

O’Malley was in the room with the two of them for the meeting. “I can still remember what the social worker said to the girl. She said, ‘Was it really worth it? Was two seconds of pleasure worth it for all this?’ ”

The O’Malleys drove the women to the maternity hospital, where their social worker met them. “I visited every day after that.” It was understood that the babies would be given up for adoption, but the women did have six months to change their minds.

O’Malley was present for the handing over of one baby. “The girl and the baby and a nun went into a room, and then the girl came out without her baby.” O’Malley had lost a baby to infant mortality, so she understood profound grief.

“The difference was, my baby died. I didn’t have to give him up,” she says. “I found watching that handover heartbreaking. Those girls were not giving up their babies by choice. There wasn’t another option open to them.”

I don’t ever remember a father coming in: by that, I mean the father of the pregnant girl

Afterwards, the girls stayed with the O’Malleys for a week or 10 days, to try and adjust. “We wanted them to stay longer, but after a week or so the social worker would come out and say, ‘It’s time to get back to your life now.’

“We had been told from the beginning by the social worker that we’d never hear from these girls again once they left; that we were part of a past they would want to forget,” she says. “We think of those girls who lived with us so often, especially this week.”

Bridget, who prefers not to be identified, was a social worker in the west of Ireland for 25 years from the late 1970s. She was one of two who worked full time with women facing crisis pregnancies: “My abiding memory of that work is grief,” she says.

“That has stayed with me. I feel this inside in the marrow of my bones, because everyone I worked with had grief. People who couldn’t have a baby – I’m talking about adoptive applicants – they had terrible grief.

“It was always a woman, whether it was the girl by herself. Sometimes they didn’t tell their parents. Or sometimes it was a friend of the girl came with her; a girlfriend. The men were absent.”

Mostly they were in their 20s and 30s. Many of them worked full time and were terrified they would lose their jobs. No matter what age they were, she says, it was “very difficult for anyone to keep a baby unless they had support from home, and support from home wasn’t always there”.

In all, her adoption agency dealt with 400 cases. Sometimes Bridget had to be the one to deliver the news of the pregnancy to a parent.

“I remember one girl couldn’t face her mother. She just couldn’t tell her. So she asked me if I would tell her.

“So I wrote to her mother and asked if she would meet me. And she did. I told her that her daughter was pregnant. And she said, ‘I would prefer if you had told me she had cancer.’ And those were the days when a cancer diagnosis more than likely meant death, in people’s heads.”