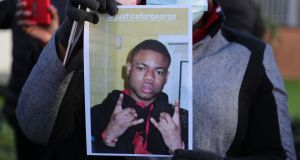 A protester holds up a photo of 27-year-old George Nkencho at a rally outside Blanchardstown Garda station. File photograph: Nick Bradshaw

An independent postmortem carried out on the remains of George Nkencho, shot by gardaí in West Dublin this month, has reached some different findings compared to the one carried out by the Office of the State Pathologist, a solicitor for the dead man’s family has said.

The independent postmortem was carried out by Prof Jack Crane, the former Northern Ireland pathologist, who has completed the examination of the remains but is due to carry out some follow-up tests.

Solicitor Phelim O’Neill, representing the Nkencho family, said he understood there were a number of differences in Prof Crane’s findings compared to those of the Office of the State Pathologist postmortem, though exactly how is not yet known.

Diverging postmortem results are not unusual. The results of Prof Crane’s postmortem may emerge as early as Thursday, a fortnight after Mr Nkencho was fatally wounded by gardaí during a disturbance outside his family home in Clonee, Dublin 15.

Mr Nkencho was shot dead by the Garda Armed Support Unit outside the house on December 30th after he had allegedly assaulted a shop worker in a nearby supermarket. Gardaí were called after that earlier incident and a confrontation between Mr Nkencho and gardaí continued over a distance.

It continued through a housing estate and towards the Nkencho family home during which gardaí said pepper spray and Tasers were deployed in a bid to subdue him.

Mr Nkencho was armed with a kitchen knife and had, his family has said, been suffering from mental health issues in the preceding months.

The Garda Síochána Ombudsman Commission (Gsoc) was investigating the shooting, as it is legally obliged to when anyone is killed or injured at or around the time they had dealings with Garda members.

Last Friday Gsoc contacted the family and informed them the postmortem on the dead man’s remains concluded he had been shot six times; five times to the torso and once to the arm. The communication to the family added two of the shots had proven fatal as they had hit vital organs.

A video taken by a bystander near the scene of the shooting appeared to depict five shots being fired after an apparent lunge at gardaí by Mr Nkencho. However, that video was filmed from a distance and was not high quality footage.

Mr O’Neill said last weekend it would be important to determine if Mr Nkencho was shot in the front or back. While Gsoc’s email to the dead man’s family last week did not set out that level of detail, it was expected more information may emerge as early as Thursday if Prof Crane’s findings were released.

The significance of any difference in his findings compared to the Office of the State Pathologist postmortem will also be closely watched.

In all homicides, unexplained deaths and in cases of fatal shootings by the Garda, the Office of the State Pathologist carries out postmortems on the remains of deceased people.

Discrepancies during postmortems, and less than definitive postmortem findings, are not unprecedented and have arisen in Irish cases in the past. However, such cases are rare, mostly because only one postmortem is usually carried out on the remains of a deceased person.

In other Irish cases when a postmortem was carried out by one pathologist and the findings later reviewed by other pathologists differences emerged.

For example, pathologists have differed in the past about whether particular bullet wounds on the remains of deceased people were entry or exit wounds.

In some fatal shootings a single bullet can pass through a limb and then into the main part of the body and one bullet can cause multiple entry or exit wounds. There can be conflicting views between pathologists when interpreting such wounds. At times some injuries cannot be definitively explained and a pathologist can instead offer their expert view on their interpretation of an injury.