More than 5,000 healthcare workers infected with coronavirus since Christmas 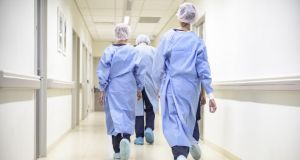 A further 28 deaths of Covid-19 patients have been reported by the National Public Health Emergency Team (Nphet). This brings to 2,488 the total number of deaths in the pandemic.

A total of 26 of these deaths occurred in January, while the dates of two deaths remains under investigation.

Nphet also reported 3,955 confirmed cases of the disease, bringing to 163,057 the total number of cases in the Republic.

The 14-day incidence of the disease now stands at 1,497 cases per 100,000 people nationally. Monaghan has the highest county incidence, followed by Louth.

Public health officials are looking at reducing the length of time the contact of a Covid-19 case has to restrict movement, but only when case numbers fall significantly.

Under a change being made now, the testing rules for healthcare workers who are close contacts are to be eased with the introduction of a second test 10 days after exposure, in addition to a first test after five days. Staff will not have to restrict their movements if the second test is negative, rather than having to wait 14 days.

The reproduction number, a measure of how many other people a case infects, now stands at between 1 and 1.3, according to Prof Philip Nolan, chair of the Nphet’s epidemiological modelling advisory group.

By Thursday afternoon, 1,789 Covid-19 patients were hospitalised, of which 169 were in ICU. A daily record 154 additional hospitalisations occurred in the previous 24 hours.

Prof Nolan said that from an epidemiological perspective, the current wave is different to what was seen since springtime, “and perhaps worse”.

“The penetration of the virus throughout all ages of the population is a particular cause for serious concern, as is risk of severe disease that all of these people face. Poor health outcomes, risk of serious or long-term illness and hospitalisation remain a risk for us all when it comes to Covid-19. That is why we must follow public health advice and protect not only ourselves but our hospital system and healthcare workers by staying at home.”

According to Prof Nolan, people have worked hard to reduce contacts and the impact of this was beginning to be felt in the figures.

However, the hospital system would continue to be challenged over the coming weeks and there were also concerns about outbreaks in specific settings.

Almost half of all cases reported during the entire pandemic occurred in the last fortnight, he pointed out. One out of every 67 people have tested positive in this time.

The incidence of the disease at present is 20 times what it was in early December, while the number of deaths each day has risen from four to 23.

The more transmissible variant first identified in the UK in December now accounts for 46 per cent of samples sequenced by Irish labs, officials told a Nphet briefing on Thursday.

Dr Cillian De Gascun, director of the National Virus Reference Laboratory, said it was not unusual for viruses to mutate over time, and two of the three recently identified variant from the UK and South Africa were in Ireland.

“While some of the new variants will increase the risk of becoming infected because they have increased transmissibility - they can stick longer and better to surfaces - this does not mean that our continued adherence to the public health advice is in anyway less effective.”

The number of contacts per case has dropped to 2.3 and, when household contacts are excluded, to “close to 1”, Prof Nolan said.

But he said current levels of mobility in the population were akin to that seen during the mid-term break and were much higher than during the first lockdown last April. The possibility of more people “drifting” back to work posed a “real risk” of further spreading the disease.

Meanwhile travellers from Brazil will have to self-isolate after arriving in Ireland and present for a test, due to the rise of a new variant of concern in that country, Dr de Gascun said. This is similar to measures introduced recently for travellers from the UK and South Africa, arising from the emergence of other variants of concern in those countries.

No further restrictions are being sought by Nphet at present, Dr Glynn said.

Earlier, it emerged that more than 5,000 healthcare workers have been infected with Covid-19 since Christmas, according to new figures.

Healthcare workers accounted for one in eight of all positive cases since December 27th, a total of 5,019 cases.

Twenty-five of these workers required hospitalisation and one had to be admitted. There were no deaths, according to the figures from the Health Protection Surveillance Centre.

One in five cases are attributed to close contact with a known case and 13 per cent to community transmission, meaning the cause of infection remained unknown.

Four out of every five cases among health staff are women, much higher than in the general population to the preponderance of female workers in nursing and other health disciplines.

Nurses were the single most affected discipline, with 1,137 cases, of almost one-quarter of the total. There were 944 cases among healthcare assistants, 377 among administrative workers and 223 among doctors.

One-quarter of cases occurred in a hospital and almost 15 per cent in nursing homes.